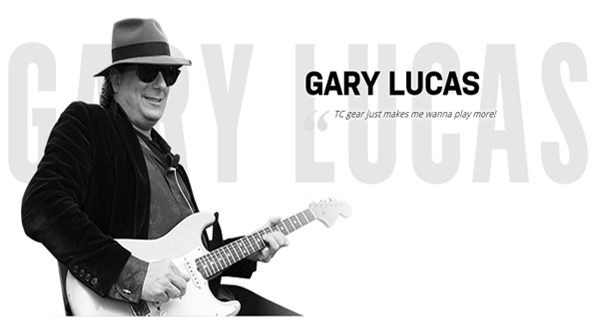 The spotlight moves on to the next guitarist in the runawaysuccess TonePrint series - and lands on Gary Lucas. Gary is aGrammy-nominated songwriter, composer for film and television, andan international recording artist with over twenty solo albums todate.

His TonePrints for Hall Of Fame reverb, Flashback Delay andFlashback X4 delay are available immediately and completely free ofcharge at www.tcelectronic.com orthough our free TonePrint app for iOS and Android.

Gary's first TonePrint, Lucasonic for Hall Of Fame Reverb,turned out to be a great all-round, creative reverb sound. Gary isnot a stranger to reverb, with roots stemming from the 60'spsychedelic scene. Gary has a Hall Of fame on his board and heprefers big 'cathedral' type sounds. Because of that, we startedout with a cathedral setting and built on that until Gary heard hissound.

The funny thing is Gary actually ended with a plate reverb thathas a bit of modulation - resulting in a huge tone that is calm andserene and has a super bright edge, with a nice chunky low endthat's not too boomy. A really nice TonePrint with a great amountof shimmer. In Gary's words,  the Lucasonic TonePrint is amystical event in space!

His second TonePrint is called WayBack Machine, a classic delaywith a psychedelic edge. Gary really likes his delays to play'against the guitar'  for a more crazy effect to createcontrast - he uses delays for fun, and he nailed it with thisTonePrint. Gary went with a reverse delay with a bit of the drysignal, but very distorted and nasal. Not a clean, pristine soundin the traditional sense, this delay harkens back to the best ofthe 60s warped sounds but has a cool futuristic vibe.

Tore Mogensen, Business Manager for Guitar at TC Electronic,adds: "This was a great TonePrint session. Gary is a very nice guyand a killer guitarist. I really think these TonePrints areinspirational and creative, with a very positive vibe. Obviously,Gary Lucas has played an instrumental part in the life of JeffBuckley, besides being an amazing solo artist. I think the recentfilm 'Greetings From Tim Buckley' which prominently features Gary,will really cement him as a pivotal person in Jeff's artisticdevelopment. Plus, a young genius artist struggling to step out ofhis father's shadow. I'd pay to see that!"