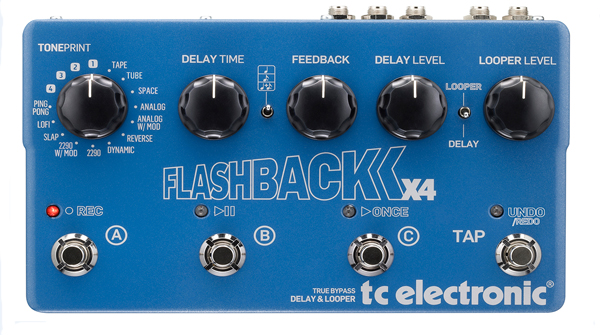 Rounding out the package is a 40 second looper with 'undo'function and guaranteed optimal signal integrity via a True Bypasssignal path that can also be switched to buffered bypass if thesituation so demands.

"Flashback X4 is the pedal we simply had to do," saysTore Mogensen, Product Manager for Guitar at TC Electronic, andcontinues:

"I think we've proven over the years that innovation, qualityand delivering products that make a difference matters most to us.It still does and it always will. But we also naturally fit rightin the middle of the guitar community. We're all guitaristsourselves.  We love going to concerts, we have anever-expanding endorsement roster and just one look at ourTonePrint program tells the world that we love this stuff. Lots andlots of the players we speak to use Flashback Delay and it turnedout that presets on a delay pedal was a big deal for guitarists. Wetook that and added to it all of our knowledge, heritage and lovefor delays - from the famous 2290 to beautiful tape-echoes - andpoured it into Flashback X4. I think the result is nothing lessthan stunning. We handpicked every delay type that has a place inboth music's history and future and then put them in a pedal that'stotally easy to operate. And to that, we simply added guitarists.Flashback X4 really is collaboration between us guitar geeks hereat TC and the guitar community. We've talked to tons of guitarplayers over the last year or two and scoured the forums soaking upinformation about what guitar players would like from amulti-function delay - and Flashback X4 is the direct result. It'sthe delay you deserve!"