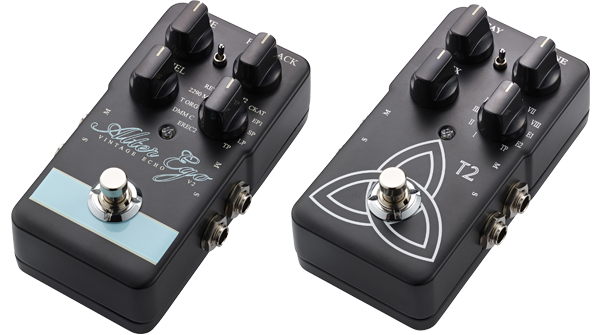 Alter Ego V2 Vintage Echo sees nine of the lush echo sounds from Alter Ego X4 moved to the compact form factor known from TC Electronic's original Flashback Delay. Among the sounds you'll find faithful recreations of the most sought after echo units of the past, such as the Echorec, the Space Echo and the Echoplex, all wrapped in a sleek-looking vintage-vibed design. Besides all of the new sounds, Alter Ego V2 Vintage Echo also sports a built-in looper, TC Electronic's proprietary TonePrint technology and the futuristic audio-tapping feature, which let's you set the tempo of your delays simply by strumming your guitar.

T2 is every reverb aficionado's dream! It contains eight new massive reverb sounds plus the two ethereal reverbs that made the original Trinity Reverb such a hit. With T2 you get decay for days combined with beautiful swirls of modulation, making it the perfect addition to every ambient guitarist's pedalboard. And, like Alter Ego V2 Vintage Echo, T2 sports TC Electronic's TonePrint technology, which lets you upload signature reverbs to the pedal or create your own via the free TonePrint Editor.