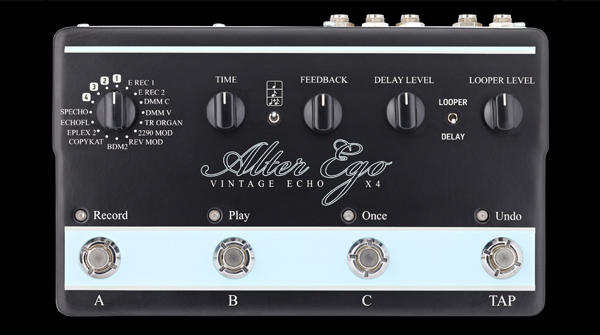 TC Electronic and ProGuitarShop team up once again to build upon their former smash hit, the Alter Ego Delay, which with its two exclusive vintage echo sounds made every delay-loving guitarist out there solo their socks off. Now TC Electronic's and ProGuitarShops's unrivaled love for delay has resulted in no less than 12 exclusive delay tones that all hark back to the beautifully lush and saturated delays of yesteryear.

On top of this you get all the modern features of TC Electronic's original Flashback X4 Delay, which include 4 TonePrint slots, 3 programmable presets, a 30 second looper, stereo in/out, MIDI programmability and you can even hook up an expression pedal in order to control any delay paramater via your foot.

So with the new Alter Ego X4 Vintage Echo you get all of the vintage sounds you could possibly desire, with all the modern features required by today's musicians.