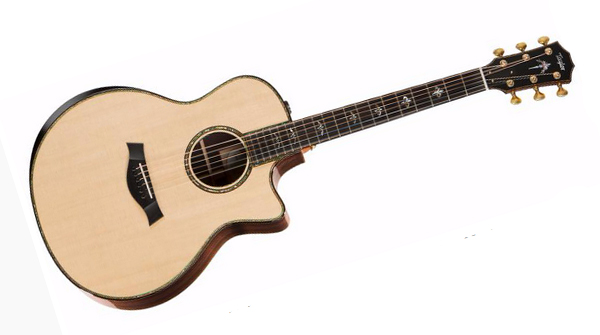 (PRESS RELEASE): Taylor Guitars is proud to debut the redesign of its popular rosewood/spruce 900 Series.

Developed by Master Guitar Designer Andy Powers, the guitars boast a refined package of premium appointments crafted from natural materials and incorporate many of the tone-enhancing innovations found in Taylor's 600 and 800 Series models, giving this luxurious class of rosewood guitars an updated voice and look.

The inspiration for the redesign began in 2014, as Powers was experimenting with wood thicknesses, bracing patterns, protein glues and other design enhancements for Taylor's 800 and 600 Series models. Because the 800 and 900 Series share the same tonewood pairing of Indian rosewood and Sitka spruce, Powers applied a similar package of voicing refinements to the 900s. In a nod to the sophisticated aesthetic identity of the series, Powers selected premium materials for the appointments, including ebony and koa wood, along with pink abalone, paua and mother-of-pearl. The resulting design showcases an abundance of rich detail that embodies the highest levels of Taylor craftsmanship.

One of the most notable new features is a hand-crafted ebony armrest on the lower bout. The ergonomic treatment elevates playing comfort and frees the player's strumming hand from dampening the soundboard. Discerning players might notice a splash of additional treble sparkle and articulation.

Powers also drew inspiration from the sea, incorporating pink abalone that was sourced from a sustainably managed fishery off the coast of Mexico's Baja Peninsula. The pink abalone and mother-of-pearl were paired for a new fretboard/peghead inlay scheme, "Ascension."  The body and fretboard are trimmed in ebony binding, accented by koa purfling with paua edge trim around the guitar top, including the fretboard extension. The rosette features ebony, koa and paua in a stunning harmony of colors.

Optimized wood thicknesses and bracing for each shape: Working with the inherent tonal properties of Indian rosewood, Powers recalibrated the density of the back and sides by thousandths of an inch for each shape. To complement each model, Powers designed a bracing scheme to work with the hand-built armrest in each new model.

Protein glue: The same protein glues used in the company's redesigned 800 and 600 Series are used in the 900 Series for the critical tone-producing parts, namely for the "power train" components: the bracing and bridge-to-top joint.

Thin finish: The ultra-thin (3.5-mil) clear gloss finish used across the 800 and 600 Series is now applied to the 900s. This thinner coverage gives the tonewoods more freedom of movement, resulting in greater projection and volume.

Expression System® 2: The acoustic voicing enhancements for the new 900 Series translate into a natural amplified tone with Taylor's patented new Expression System 2 (ES2) electronics. The ES2 incorporates three uniquely positioned and individually calibrated pickup sensors that are installed behind the saddle, through the bridge, to capture more of the guitar's dynamic acoustic energy.

The 900 Series will be available in the 914ce and 916ce and in limited First Edition models only at Authorized Taylor Dealers later this year.