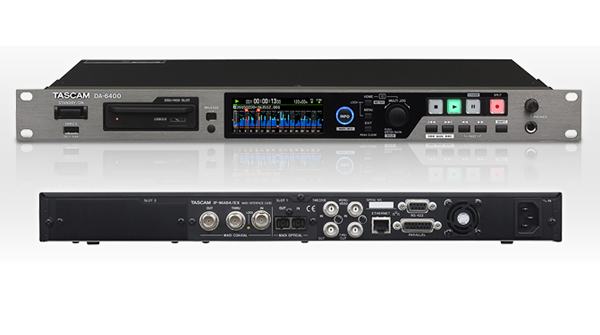 TASCAM, the brand synonymous with professional recording products, has introduced the DA-6400, a compact 64-channel digital multitrack recorder, providing highly stable and reliable recording and playback in any environment. Featuring removable SSD drives for storage, and multi-playback functionality, the DA-6400 is an unbeatable option for professional remote recording.

A universal backup recording system for up to 64 tracks, the DA-6400 works flawlessly with Digital Audio Workstations or live mixing consoles. Compatible with a range of interface boards such as MADI, DANTE, DigiLink, AVB or AES/EBU, the versatility of the DA-6400 ensures integration into virtually any recording environment.

Using a real-time, embedded operating system, the DA-6400 offers quick start-up and simple operation. PCM recording and playback up to 96kHz allows compatibility with existing recording systems, whilst files are saved approximately every 20 seconds, to ensure file losses are kept to a minimum during unexpected power failures. Files are recorded to SSDs in removable AK-CC25 storage cases, allowing for simple swapping of drives, even when the power is on. Included is a 250GB TASCAM SSD, whilst the storage case includes a USB 3 jack for stand-alone use - BWAV files are easily offloaded into a DAW session for simple transfer.

Ideal for use as a backup recorder, the DA-6400 is capable of receiving timecode input from a ProTools system to allow synchronised operation. Input/output options include the IF-MA64/EX interface card, with both coaxial and optical MADI connections. TASCAM plans to maintain the DA-6400 as a ‘living’ system by adapting it to new interfaces and systems continuously. BWF format is supported as a recording format, ensuring time information can be stored in files. Alternatively, time information can be captured through the TIMECODE IN input.

In addition to its capabilities as a backup recorder, the DA-6400 is also the ideal system for multi-channel playback, perfect for use in theatres, theme parks and similar venues. Serial/parallel external control can also be used to send play triggers in addition to ordinary playback operation.

Perfect for use where rack space is at a premium, the DA-6400 is a compact U1 size, and weights just 3.5kgs to enable great mobility when transporting to various locations – ideal for life on tour. 1000BASE-T gigabit LAN is included for remote control, and standard FTP (File Transfer Protocol) can be used to send files to the unit or remotely access recordings from Windows, Macintosh, or UNIX systems.