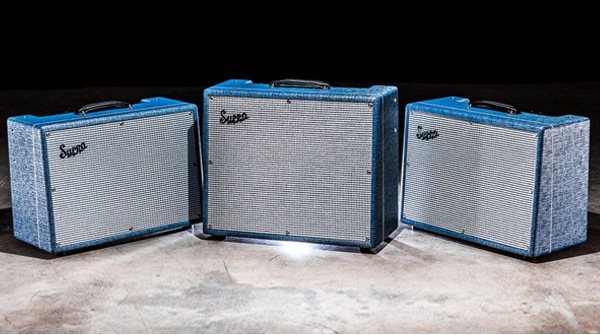 (PRESS RELEASE): The recently re-introduced Supro Amplification brand has already picked up a whole raft of artists using the iconic amp brand around the world.

Described by Mojo magazine as ‘America’s greatest hard-rock act’ Aerosmith are synonymous with some of The greatest riffs and guitar tones of all time, thanks to axe-man Joe Perry. Joe has recently started using the Supro Coronado and Thunderbolt Plus combo amplifiers.

Although initially a solo performer, recording the classic 'Rocky Mountain Way’ back in 1973, Joe Walsh came to worldwide recognition as a member of The Eagles. After many years touring and recording, Walsh has returned to his solo career roots, releasing no less than 12 albums. Well respected as a guitarist (his duet solo with Don Felder on ‘Hotel California is regarded as one of the greatest solos of all time in various polls) Joe is now using both the Supro Dual-Tone and Thunderbolt Plus to get his classic tone.

Last but not least, Steve Stevens, virtuoso guitarist, well-known for his Grammy-Award winning ‘Top Gun Anthem’, touring and recording with Billy Idol, as well as engaging in a raft of session work (including a stint with Michael Jackson) is now using the Supro Dual-Tone both live and in the studio. “It’s very easy to mic this amp, very easy to get a good guitar tone” says Steve "…it's just a fun amp to play through”.

Other names using Supro include Paul Simon, Adrian Belew, John Verity, Richard Fortus of Guns ’n' Roses and Robby Krieger. Perhaps it's time to check out why these, and other guitarists around the world are re-discovering the sound of Supro.