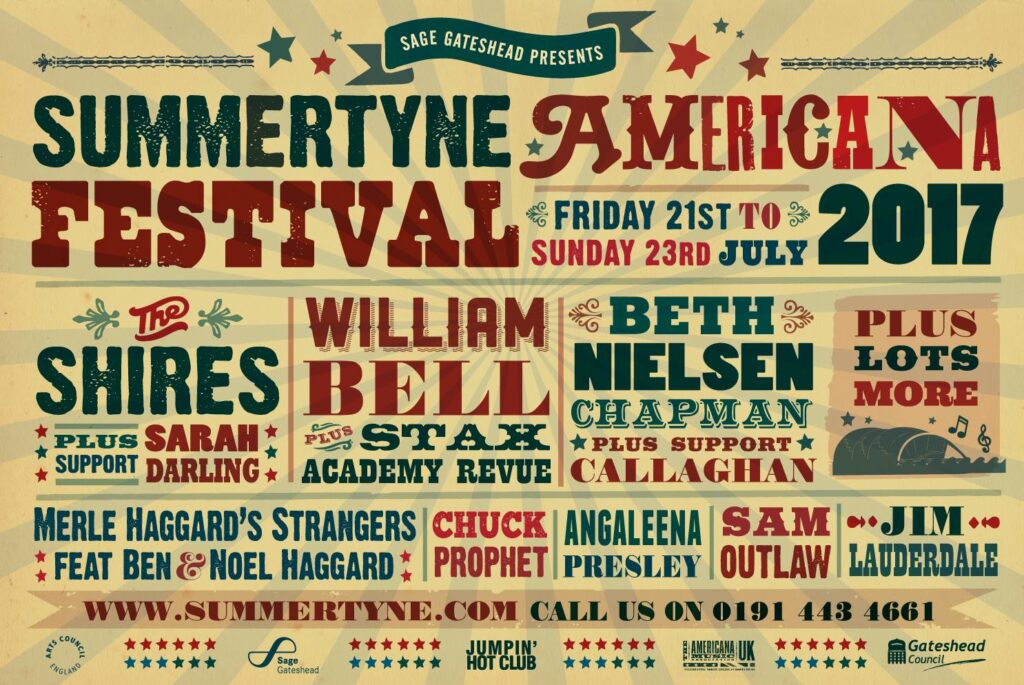 Amid the soaring popularity of Americana and country music in the UK, the 12th SummerTyne Americana Festival takes place at the prestigious Sage Gateshead from Friday July 21 to Sunday July 23, bringing together legendary artists, rising stars and the best of the next generation in a full, 3-day programme of special events and some exclusive performances.

Headlining Sage One are the UK’s most successful homegrown country band The Shires, with very special guests including rising star Sarah Darling; a UK exclusive show from this year’s Grammy Award winner for best Americana Album, Stax legend William Bell with his band, supported by the remarkable, 12 piece Stax Academy Revue and a one-off, unique show from award-winning US singer-songwriter Beth Nielsen Chapman, who will perform with special guests Callaghan and the SummerTyne Strings.

Sage Two, a year on from the passing of country legend Merle Haggard, welcomes Merle Haggard’s Strangers featuring his sons Ben and Noel Haggard, supported by Ashley Campbell, daughter of country superstar Glen Campbell. Plus, following rave reviews for her new album Wrangled, Kentucky native and Pistol Annie Angaleena Presley and a double bill of two of the finest female blues voices from both sides of the Atlantic, Jo Harman and Lisa Mills. Godfather of the Nashville scene, Jim Lauderdale will play an unmissable double-bill with Californian rising star Sam Outlaw and making a welcome return to SummerTyne, much lauded American singer-songwriter Chuck Prophet, with his five-piece band.

In the SummerTyne Late Lounge, there’ll be an opportunity to hear some of the most exciting new voices in the international Americana arena: New Zealand born Marlon Williams, Manchester-based Californian Jesca Hoop, with her full band and supported by up and coming UK duo Worry Dolls, and from Newcastle via Massachusetts, Cath & Phil Tyler in a concert featuring special guest and collaborator Tim Eriksen.

Another must see at SummerTyne Americana Festival 2017 will be an exhibition of artwork by Jon Langford.  A respected visual artist he is best known for his striking portraits of country music icons including Hank Williams, Elvis Presley and Johnny Cash.

More news soon on the line-up for the Concourse Stage and additional events.