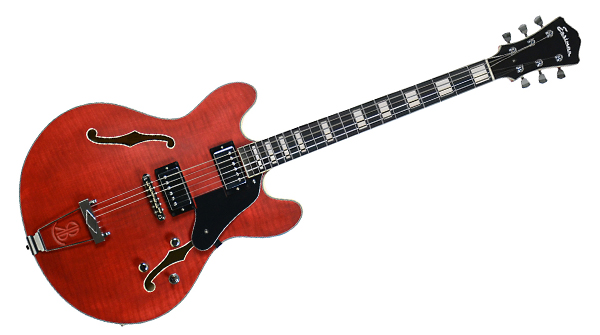 Eastman guitars and Asleep At The Wheel guitarist, Ray Benson, are to unveil a new signature custom model at this year's Summer NAMM, the Thinline T486-RB. The Western Swing icon will also be appearing in Nashville on Eastman Guitars booth (#1016) on Thursday, July 17 and Friday, July 18 from 12:00pm to 2:00pm.

(PRESS RELEASE): Eastman Guitars has collaborated with legendary guitarist Ray Benson on a signature and custom model guitar, the Thinline T486-RB, faithfully built to his exact specifications. A nine-time Grammy Award winner, founder and frontman of the revered country western swing band Asleep At The Wheel, Benson has released more than 25 studio and live albums over the last four decades. As a producer, Benson has worked with an impressive who’s-who A-list including Willie Nelson, Aaron Neville, Brad Paisley, Trace Adkins, Merle Haggard, Carolyn Wonderland, and Vince Gill. His latest project, a solo album titled A Little Piece, was released earlier this year.

Ray Benson will be visiting the Eastman Guitars booth during Summer NAMM in Nashville. Swing by and meet the man himself! Often referred to as a “Texas Legend” and an “American Treasure,” long-time local resident of Austin, Texas; Benson was named the official Texas state musician in 2004 and Texan of the Year in 2011. Benson is currently performing with an Eastman Thinline T486 and AC420 jumbo acoustic.

The T486-RB Ray Benson signature model is a double cutaway featuring deluxe laminate top, back and sides, with ivoroid binding throughout the body, neck and headstock. The maple neck features an ebony fingerboard adorned with standard pearl block inlays. The guitar is a 24¾” scale length between the 1¾” bone nut and nickel Gotoh tunomatic bridge. Additional nickel hardware includes Gotoh tuners. Handwound Lollar pickups include an El Rayo at the neck with a Low Wound Imperial at the bridge. Nickel control knobs feature one volume, one tone, and 3-way selector switch. The guitar is completed with a custom-sized black pickguard and is finished in a transparent red satin with a custom designed “RB” logo branded between the trapeze style tailpiece. D’Addario strings and hardshell case included.

The T486 Ray Benson custom model includes all of the exacting specifications listed above, minus the “RB” logo brand.