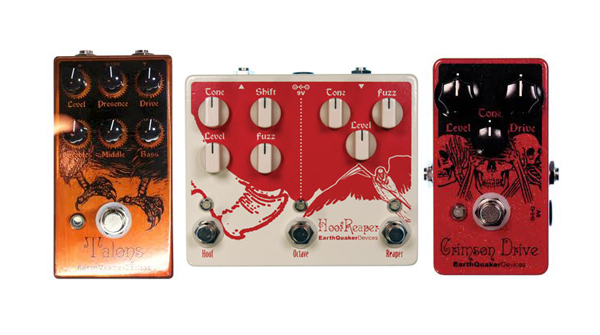 Hoof Reaper Octave Fuzz Spectacular
The Hoof Reaper features our popular Hoof and Tone Reaper fuzzpedals in one handy enclosure with the added bonus of an old schoolanalog octave up. It was originally released as a special limitedrun item back in 2010 and demand was so high that we decided toreintroduce it back into our line on a semipermanent basis. Thisdevice will be manufactured in limited quantities.

Crimson Drive Germanium Overdrive
The Crimson Drive was one of the first pedals we released back in2006. It was highly regarded by the few who picked one up but waseventually cut due to a lack of quality germanium transistors. Werecently uncovered a massive batch of excellent NOS black glassgermanium transistors that fit the bill and decided to bring theCrimson drive back in all it's gritty, harmonic-rich glory. Thecircuit is exactly the same as it was with the addition of an oftenrequested tone control for fine tuning. This device will also bereleased in limited runs.

Talons High Gain Overdrive
The Talons Overdrive is a project we have been working on for along time at EQD. After nearly a year of variations and fine tuningwe have finally nailed it. It very well may be the best and mostversatile go-to overdrive we have ever heard! It features a fullactive tone stack, a presence control for sculpting the top end andmore gain than one should ever need from an overdrive in a verycompact format. Unlike all our other overdrives, the Talons was notdesigned to emulate any specific sound or era. It can be glassy andopen, scooped and chunky, gritty and wild, light and airy, drunkand unhinged... We will not disappoint you, there is something foreveryone in this box!