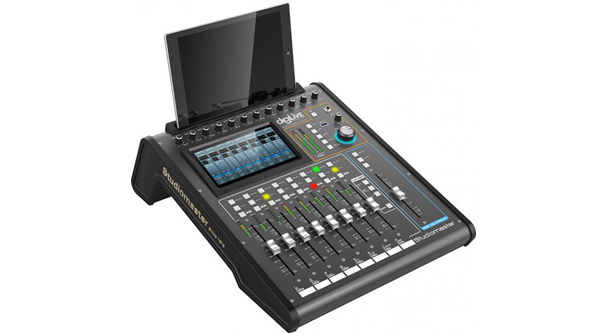 digiLiVE 16, a 16 input – 16 bus – 8 output digital audio mixer, sports a control surface integrating a 7-inch Android driven high-resolution touch-screen and eight motorized 100mm fader operation, alongside fully remote (iOS and Android) tablet operation. With an anticipated price point well below £1000 / €1500, this ultra versatile professionally specified mixer has target applications across the pro-audio and MI sectors, being equally attractive to gigging musicians, small venues, dry hire and installation companies. As such, the company will be showing the new mixers on its stands in both the prolight+sound and musikmesse exhibition halls.

Other new product from Studiomaster being shown at prolight+sound includes the European debut of the VISION compact high quality analogue mixer series. Vision is positioned immediately beneath the top of the range Horizon series, offering its larger sibling’s quality design and construction, operational and audio performance, in an even more compact, price competitive form. VISION is available in unpowered (VISION 8) and 2x500W powered (VISION 1008) and 2x1000W (VISION 2008) variants, featuring ultra-lightweight audiophile quality Class-D amplification. All models feature 8 channels – 6 mic and 2 stereo – the same studio quality twin DSP effects as on the Horizon, and 9-band graphic EQ.

Meanwhile, on the musikmesse stand Carlsbro is showing a new 20 watt addition to the Sherwood acoustic series and a higher specified addition to its hugely successful e-kit range. The CSD 310 offers specifications and build and performance features on a par with product from market leaders Roland, Alesis and Yamaha, while maintaining the Carlsbro series price competitive edge.