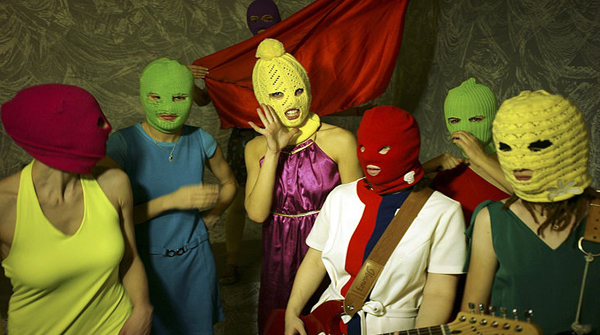 The imprisonment of Russian all-girl outfit, Pussy Riot has causedunderstandable outrage around the free world and now a number ofA-List musicians have backed the growing din of support for thejailed trio.

Pussy Riot is a masked feminist punk-rock collective that stagespolitically charged guerrilla performances in and around Moscow.However, their latest stunt, which has led to their incarceration,was part of a protest movement against Vladimir Putin which saw theoutfit perform a song protesting the Russian president in theCathedral of Christ the Saviour of the Russian Orthodox Church inMoscow.

At  a recent show in Moscow RHCP frontman Kiedis wore a PussyRiot t-shirt whilst Franz Ferdinand's Alex Kaparanos dedicated'This Fire' to Pussy Riot, also whilst performing in the Russiancapital. Later, Kaparanos took to Twitter to describe Putin as "theworst kind of hypocrite" for professing to be a fan of John Lennonwhilst attempting "to imprison contemporary musicians who expresstheir political views."

The trial began this week with the three women in question,Yekaterina Samutsevich, Nadezhda Tolokonnikova and Maria Alyokhinapleading not guilty to the charges of hooliganism and religioushatred. If found guilty, they could serve seven years injail.