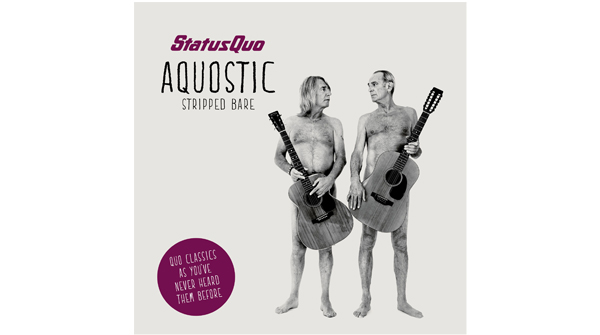 After 50 years at the top of their game as one of the world’s premiere boogie rock acts, Status Quo have leapt out of their comfort zone as they announce the release of the game-changing Aquostic (Stripped Bare) LP.

The new acoustic collection will give classic Quo numbers the chance to shine in a stripped down format; the amps are turned off, this album is fully acoustic and boasts 22 completely reworked Quo hits and fan favorites.

Stripped of the sheer power of the famed twin-Tele assault, it’s time for the melodies and the band’s innate musicianship to shine through. The band is helped out along the way by female backing vocalists, additional musicians on some tracks and even a string section. The arresting cover image was shot by none other than the superstar Bryan Adams.

And shine they do.  Rendered here in a simpler, sharper focus, it’s the tunes and the progressions that are the stars.  The lyrics seem to benefit from the extra space and these stone cold rock classics are given a fresh personality and potency.  Tracks are taken from across the band’s incredible output throughout the decades; some permanent features of the electric set list, others being issued into the limelight for the first time – having been scrubbed and polished and reappraised through the prism of a new approach.

Tracks recorded include the hits “Rockin' All Over The World,” “Down Down,” “Paper Plane,” “Down The Dustpipe” and of course “Pictures of Matchstick Men”; plus album classics such as “And It's Better Now,” “All the Reasons,” “Reason For Living,” and special re-workings of some of their great stage numbers: “Mystery Song,” “Rain,” “Softer Ride” and “Don't Drive My Car.”

There’s a new swing and verve to some of these recordings. Quo are a band that practice their art more than most and it’s the virtuosity that is apparent here.  Aquostic (Stripped Bare) reflects the hours spent backstage or on the bus running through progressions and figures on battered acoustics while the Telecasters await onstage. Three chords? Whatever… Do keep up!

A set to change a few peoples’ minds.  A set to raise a few smiles.  A set that didn’t require producer Mike Paxman to keep putting 50p in the meter.  A set to be treasured.