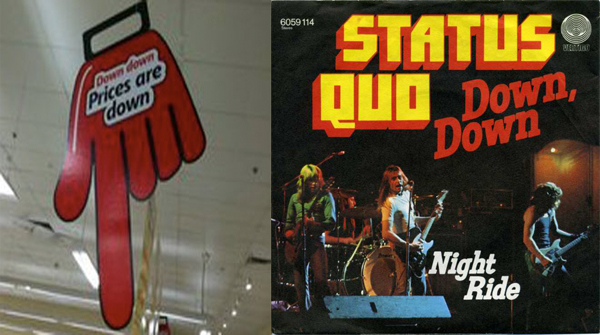 Status Quo have re-recorded their classic 1975 hit, 'Down Down'for a new Australian commercial.

The new re-worked track will feature on the 3 minute advert forsupermarket giant Coles with the lyrics changed to 'down down,prices are down.'

The band - who have sold over 110 million albums since 1967 - alsoplay guitars in the shape of the  Coles trademark giant redhands.

The classic track, which spent a week at the top of the chart inJanuary 1975, has been used in the Coles television campaign forthe last two years, but without Status Quo's involvement

The band recorded the ad at London's Abbey Road studio and havealready posted a "special version'' of the song on their ownofficial website.

The new Status Quo ad was created by Melbourne's Big Red Agency,which took over the Coles account in 2010.