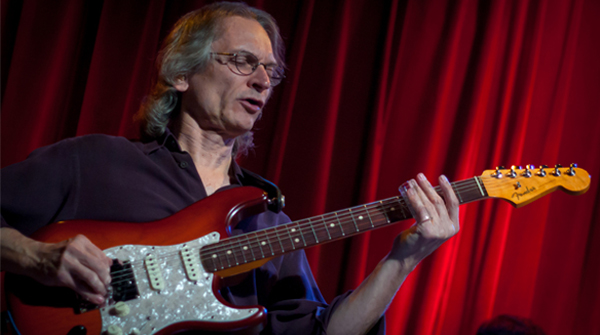 Sonny Landreth will play his only UK show at the beautiful Under The Bridge venue, which is located under the Chelsea Football Club pitch in West London on Monday 26th October. His will be playing songs from his new album ‘Bound By The Blues’ which was out on June 8 on Provogue/Mascot Label Group.  The recordings mark a return to the slide guitarist's musical roots, presenting a bold, big-sounding collection of tracks that swagger like the best of classic rock, climb to stratospheric heights of jazz informed improvisation, and inevitably remain deeply attached to the elemental emotional and compositional structures that are at the historic core of the blues.  Landreth offers, "Ever since The Road We’re On [his Grammy-nominated 2003 release], fans have been asking me, 'When are you going to do another blues album?’ After expanding my songs for Elemental Journey into an orchestral form, I thought I'd get back to the simple but powerful blues form. I’d been playing a lot of these songs on the road with my band, and we’ve been taking them into some surprising places musically. So going into the studio to record them with just our trio seemed like the next step.”

With Landreth’s mountainous guitar tones and nuanced singing leading the way on its ten songs, ‘Bound By the Blues’ is a powerful tribute to the durability and flexibility of the genre, and to his own creative vision. It’s also a radical departure from his previous two albums, 2012’s classical/jazz fusion outing Elemental Journey and 2008’s guest-star-studded From the Reach.

The lean Mississippi native, who grew up in Lafayette, Louisiana, has enjoyed a prolific career for decades, dating back to his solo debut album Blues Attack in 1981.  Although that album fanned the flames of his reputation as an emerging force in roots music, Landreth kept a parallel career going as a celebrated sideman and session player. Over the years he performed and recorded with artists that include John Hiatt, British blues innovator John Mayall, and he toured as a member of Jimmy Buffett’s Coral Reefer Band. He also collaborated with Eric Clapton, and has performed at all of Clapton's prestigious Crossroads Guitar Festivals since 2004.  Along the way Landreth has continued to develop his vision and his musical voice, growing increasingly original and diverse, expanding from blues, zydeco, folk, country and jazz into increasingly category-blurring musical excursions like ‘Bound By the Blues’. He offers, "Developing a style and an approach that is your own musically is not something to be taken for granted,  I'm at a point in life where I want to make the most of every moment I can and that changes your perspective, your priorities and how you relate to everyone else. And at the end of the day, I think that's the essence of what I wanted to express with Bound By The Blues."