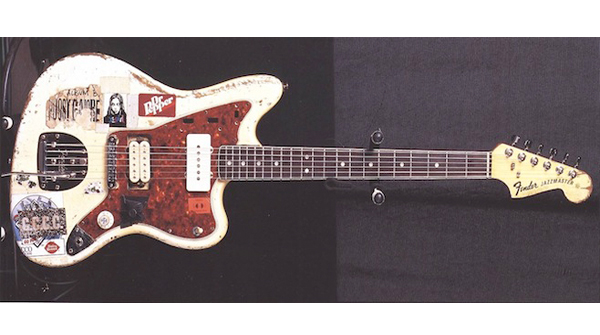 Noise rock legends Sonic Youth have been reunitedwith a pair of guitars that were stolen from a gig in 1999, reportsPitchFork.

The incident took place prior to a festival appearance in OrangeCounty on July.4 1999. The band's rented truck, which was loadedwith £1000's of pounds worth of modified equipment , was takenduring the middle of night and was later found in Los Angeles,empty.

However, over the years some the bands fans have kept Thurston andthe band updated on any sightings of the pair of Jazzmasters andthis month, the missing sixth and seventh guitars to be recoveredfrom the robbery both reappeared within one week of eachother.

"It's kind of wild. After all this time, things are stillsurfacing thanks to the diligence of fans."

One white Jazzmaster, used by ThurstonMoore on tracks such as 'Bull in theHeather' and 'Dirty Boots' was discovered by a Belganfan who noticed it on eBay.

The second was Roanaldo's burgundy Jazzmaster which was discoveredon a sale at a pawn shop and recovered via a lengthy thread at thewebsite, OffsetGuitars,a "forum of geeks for these kinds of guitars."

"Three pages into this discussion, someone said, 'This lookslike it's Sonic Youth-ized or one of those stolen SYguitars."

In related news Sonic Youth will be releasing anew live album recorded in August 1985 at Chicago's Smart Bar. TheLP was recorded on a four-track tape recorder and will be releasedon November 14 via the band's label Goofin' Records.