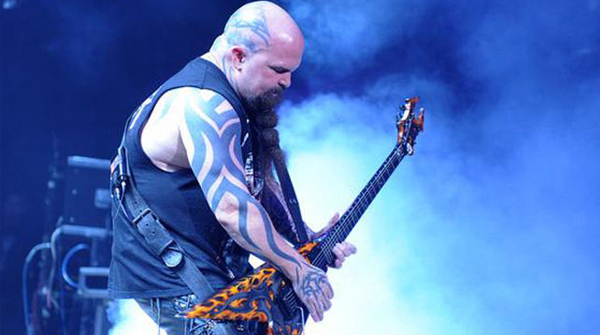 Slayer may still be some time away fromcompleting the recording of their new album, but lead thrasherKerry King is confident the new album will bereleased this year (2013).

In a recent interview with 'That MetalShow' host Eddie Trunk at NAMM 2013King said (via LoudWire):

"We have two songs that we completed last May and just needmixing. We have another that just needs vocals and leads and me and[drummer] Dave [Lombardo] are working on a complete new one that wehaven't demoed. The whole hold-up now that seems to happen withevery album we do is that Rick Rubin wants to change distributors.So we're left in limbo until he lands somewhere. Realistically weare without a deal, but we plan on staying with Rick. When thatgets settled we will start recording. I'm very comfortable sayingthat it will be out this year."

King also spoke of his relationship guitarist JeffHanneman, who is still recovering from necrotizingfasciitis after suffering a spider bite.

King said of his fellow axe-man:

"Not to sound weird, but when you get off tour, you scatter.And [it's not] because I hate him, I don't talk to him because Ihad enough of him! I don't even talk to [singer] Tom [Araya]. Theonly reason I talk to Dave is that we rehearse all the time. When Igo off tour I just want to go chill and be Kerry, not Kerry King.From what I know he's still trying to get basic in thegame."