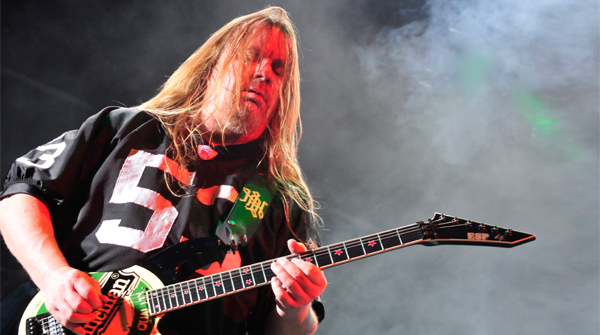 A statement on the band's Facebook fan-page saidHanneman died of liver failure in California on Thursday, he wasaged 49.

Hanneman had been sidelined from Slayer since2011 after suffering necrotising fasciitis, a flesh-eating diseasethat is believed to have been brought on by a spider bite.

"Slayer is devastated to inform that their bandmate andbrother, Jeff Hanneman, passed away at about 11am this morning nearhis Southern California home," the statement read.

Hanneman was being treated in a local hospital when he"suffered liver failure," it added.

Over the past three decades, the band released nine studioalbums and performed at countless live shows around the globe.

A number of musicians took to their social media channels to paytribute to Jeff, including ex-Guns'n'Rosesguitarist Slash,

"Tragic and shocking news about Jeff Hanneman. He is going tomissed by so many. What a sad day for Metal. RIP man".

"We're saddened by the death of SLAYER guitarist, JeffHanneman. Our prayers and best wishes to SLAYER and Jeff'sfamily."

"Anvil send their condolences to the Slayer and the JeffHanneman family. R.I.P."

"an intense and powerful guitarist and a force to be reckonedwith on stage".

"The music industry has lost a true trailblazer, and ourdeepest sympathies go out to his family, his bandmates and fansaround the world who mourn his untimely passing."

Our thoughts are with Jeff's friends and family at thistime.