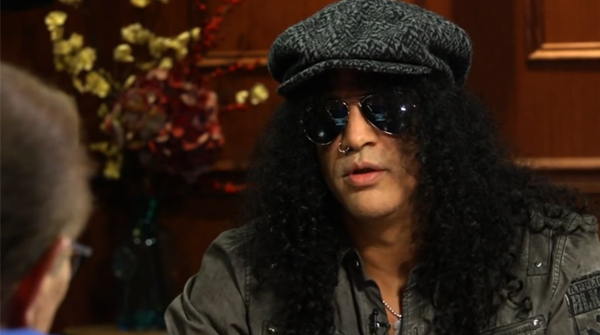 Slash has been discussing the possibility of a full Guns N Roses reunion with US talk show godfather Larry King.

The Grammy award winning guitarist, who stopped by the ‘Larry King Now’ studios last week, said on the subject of a ‘classic line-up’ reunion (via Hennemusic):

“That's the $64,000 question. But it's not something that any of us have reached out to each other and said that we wanted to do thus far. So, rather than be a pessimist and say, 'No, it'll never happen,' it's not like I'm harbouring a lot of resentment. But it's not something that we're all thinking about doing. So if it happens one day, it happens. If it doesn't, I don't think anybody's, you know, losing any sleep over it."

Slash and King also chatted about GNR’s induction into the Rock & Roll Hall of Fame as well as the band’s history and how they formed.

“It was the perfect combination,” Slash explained.

“I’ve always said that we were the only five people that could have made that band.”