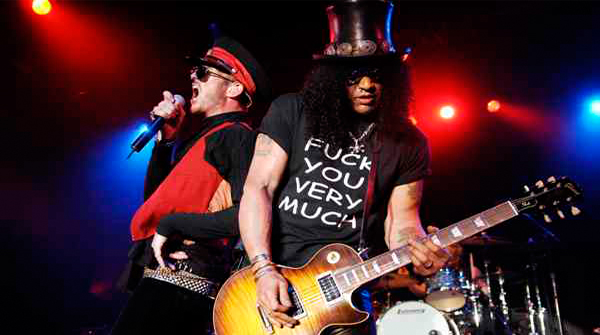 Slash was being interviewed on Banana 101.5 when he revealedthat the band have "quietly been looking" for Weiland'sreplacement, who parted ways with the hard-rock 'supergroup' in2008.

"With Velvet, there's no singer in place, and there hasn'tbeen, but we've been, actually, very quietly been looking forsomebody who's right for that band."

"But, interestingly enough, I'm playing some shows in SouthAfrica with [fellow former Guns N' Roses and VelvetRevolver members] Duff [McKagan] and Matt[Sorum], and Glenn Hughes and Sebastian Bach, andthat's going to be interesting. It's calledKings Of Chaos, and Duffand Matt and Steve Stevens and GlennHughesand Sebastian Bach are the main band, and then theyhave guys that come up and guest… It's going to be sort oflike Velvet Revolver with Sebastian and GlennHughes singing."

Velvet Revolver briefly reunited with Weilandin 2012 to perform four tracks at a Los Angeles tribute concert forlate songwriter John O'Brien, but the band has otherwise remainedon hiatus. Weiland was also recently fired by Stone TemplePilots, with whom he founded along with RobertDeLeo, Dean DeLeo and EricKretz back in 1986.