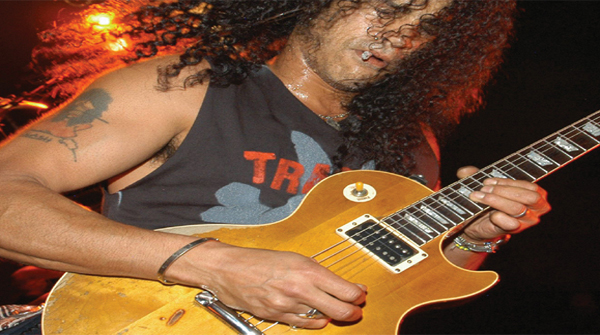 Slash Reveals Desire to Start Work on Follow-Up to ApocalypticLove -

So far it has been a busy year for Ex-Guns N' Roses & VelvetRevolver guitarist, Slash.

What with the hard-rock icon's Rock and Roll Hall of Fameinduction, which also helped re-ignite old controversies withformer band-mate, Axl Rose, the release of his new album,Apocalyptic Love, and the world-renowned guitarist finally beinghonoured for his tireless work with a star on the Hollywood Walk ofFame, you'd think that he'd treat himself to some time-off. WellSlash, who turns 47 later this month, certainly doesn't seem tothink that.

Speaking with Rolling StoneMagazine, after the Walk of Fame ceremony on July10th, he revealed his intentions to begin work on a newalbum:

"We've got the tour that's gonna go into next year, we're startingwork on the next record."

"I definitely feel like I'm cresting a certain wave in my careerwhere I'm having a really great time, I love what I'm doing, I lovethe people I'm working with and I'm feeling very energized. Ihaven't had that feeling since when Guns started."

Slash went to explain how he feels about his new band andband-mates:

"It's kind of a Cinderella story," he said, "I had no idea thiswas going to be a band I was going to do things with - I thought itwas a pickup band. It turned out to be really, from the get-go,this kickass band, and now it's more like a group."