Slash Honoured with Star on Hollywood Walk of Fame 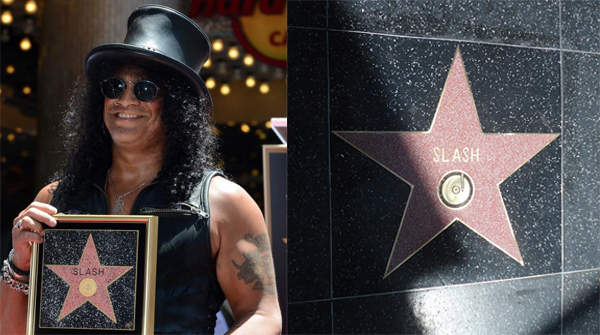 Slash Honoured with Star on Hollywood Walk of Fame -

The rock gods have finally paid homage to the illustrious &influential career of Slash, earlier this year he was inducted intothe Rock and Roll Hall of Fame and yesterday (July 10th) the formerGnR slayer received a star on the Hollywood Walk of Fame.

"I've been a part of the Hollywood fabric for a long time and toactually be appreciated by the city of Hollywood is a huge, hugehonour," Slash said at the unveiling of his star on Tuesday, "Andso I want to thank everybody for this; it's unbelievable."

According to TMZ, Sheen was his usual controversial self as hejoked with the crowd:

"It's quite fitting that Slash is getting a star on the verystreet Axl Rose will one day be sleeping on … This star is going tobe stepped on more than the coke we did in the '80s."

In addition to his 2012 honours, Slash was also named by Timemagazine as the No. 2 guitarist of all-time, sitting just behindJimi Hendrix on their list.

Slash, who has sold over 100 million albums in various rockoutfits, is currently celebrating the release of his new soloalbum, Apocalyptic Love, which hit No. 4 on the Billboard Top200.