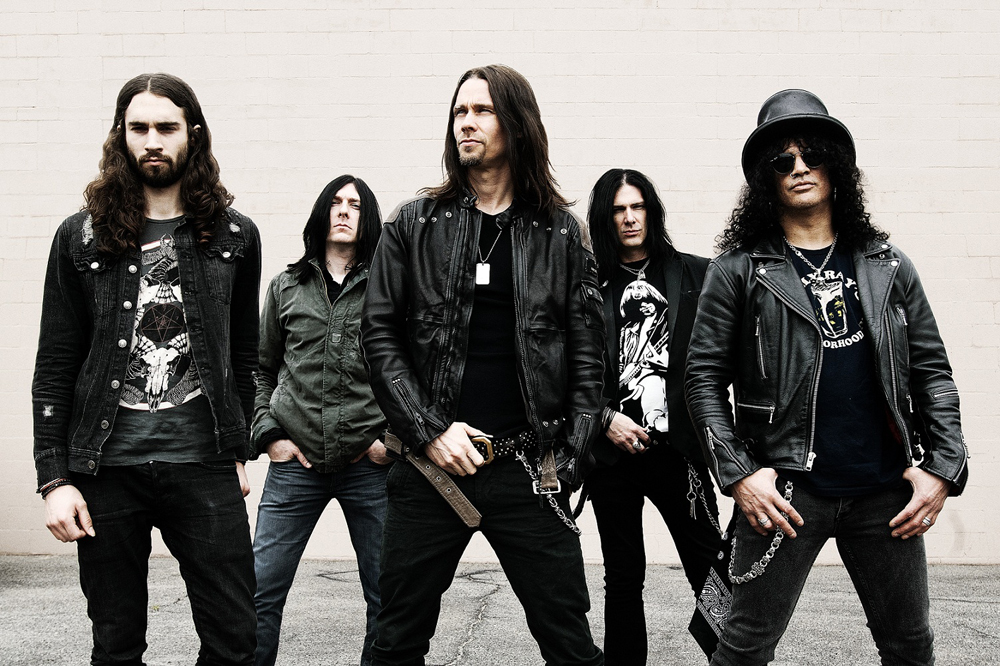 SLASH Featuring Myles Kennedy and TheConspirators will broadcast their last summer concert LIVE from theHouse of Blues in Las Vegas on Thursday, July 25 at 9:00pPT/Midnight ET via EVNTLIVE. Fans who can't make itto Las Vegas and want to experience the evolution of live, onlineconcerts can log on directly to https://www.evntlive.com/#/event/1000476starting at 9:00 PM PT/Midnight EST on Thursday, July 25to takepart in this extraordinary social viewing event.

"We are thrilled to offer online access to one of thegreatest musicians of all time, Slash, while giving fans fromaround the world an up close, personal and completely immersiveexperience," said David Carrico, co-founder and chief marketingofficer, EVNTLIVE.  "EVNTLIVE is transforming how weexperience concerts individually and with others, while gettingright into the act wherever you are.

SLASH and his bandmates Myles Kennedy andThe Conspirators Myles Kennedy (vocals), BrentFitz (drums),Todd Kerns (bass)and Frank Sidoris (guitar) are currently wrapping aworld tour for their critically acclaimed album APOCALYPTIC LOVE which earned SLASH histwo first-ever #1 rock radio hits: "You're ALie" and "Standing In The Sun." The album's thirdsingle "Anastasia" has cracked the Top10 at Modern and Active Rock and Top 5 at Mainsteam Rock.The album was produced by Eric Valentine, who did the samehonors for his first solo disc SLASH, and all the songs onAPOCALYPTIC LOVE were written togetherby Slash and Myles Kennedy.

This fall, SLASH will release NOTHING LEFT TO FEAR, the first-ever motionpicture he has co-produced from Slasher Films, the Rock & RollHall of Famer's production company. NOTHING LEFTTO FEAR will have a limited release in select theatersnationwide on Friday, October 4 and arrive on Blu-ray Combo-Pack,DVD, and On Demand Tuesday, October 8. NOTHING LEFT TO FEAR the Original Motion PictureSoundtrack will also be released on October 4, exclusively at www.PledgeMusic.com/slash, the same daythe film opens in select theaters. Written and produced by SLASHand Nick O'Toole, the soundtrack includes the film score plus twooriginal songs: "Nothing Left To Fear" which features vocalistMyles Kennedy and the instrumental "Welcome To Stull." When fanspledge and pre-order the album through www.PledgeMusic.com/slash, they willgain access to one-of-a-kind experiences with SLASH, as well asmerchandise for the film, access to interviews, song streams, firstlooks at film art, clips and more.

For more information on all packages available, clickwww.pledgemusic.com/slash

Due in select theaters Friday, October 4and availableon Blu-ray Combo-pack, DVD and On Demand starting Tuesday, October8, NOTHING LEFT TO FEAR is a harrowingtale in the spirit of the terrifying horror films of the 1970s. Themovie is inspired by the legend of Stull, Kansas, which issurrounded by Internet folklore proclaiming the town to be one ofthe Seven Gateways to Hell.  NOTHING LEFT TOFEAR was written by Jonathon W.C. Mills and directed byAnthony Leonardi III. For more information on the film, pleasevisit https://www.facebook.com/nothinglefttofearmovie?fref=ts.