Slash feat. Myles Kennedy and the Conspirators to Release 'Live At The 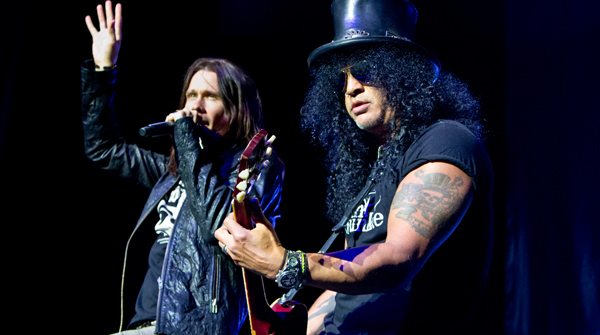 (PRESS RELEASE): While Slash featuring Myles Kennedy and The Conspirators are currently in the midst of a headlining world tour, the group has partnered with BitTorrent to release 'Live At the Roxy 9/25/14' as a BitTorrent Bundle on Monday, June 15. The same day the live concert will be released on DVD, Blu-ray, 3LP, 2CD through all major retailers and digital formats simultaneously via Eagle Rock Entertainment.

The group will make the digital version available in the BitTorrent Bundle on Monday, June 15 in the U.K. and on Tuesday, June 16 in the U.S. For more information, visit: (HERE).BitTorrent Bundle has a global user base of 170 million music and film fans.

Shortly after the release of their current World on Fire album album--Slash's third straight solo album to debut in the Top Ten in the U.S and the second album with his official band The Conspirators--the iconic American rock guitarist, songwriter and film producer SLASH took the stage with his band The Conspirators  which features Myles Kennedy (vocals), Brent Fitz(drums), Todd Kerns (bass) and Frank Sidoris (touring guitarist) at the legendary Roxy Theatre on Sunset Strip in West Hollywood, CA. A staple of rock history that helped birth countless bands, including Guns 'N' Roses, the atmospheric venue gave fans a brilliant opportunity to see the band up close as they delivered a set packed with recent solo tracks, including several from the new album World on Fire, and classics from Slash's days with Guns N' Roses and Velvet Revolver: "Ghost," "Back From Cali," "World On Fire," "Sweet Child O' Mine," "Anastasia," "Paradise City," "Slither," "Nightrain" and many more. The intimate setting inspired the band to deliver a scintillating, dynamic performance that is brilliantly captured on 'Live At the Roxy 9/25/14'.

Slash's guitar prowess paired with the raw energy of Myles Kennedy and the Conspirators proves a truly potent live force and 'Live At the Roxy 9/25/14' sets the benchmark for high octane rock n roll shows.