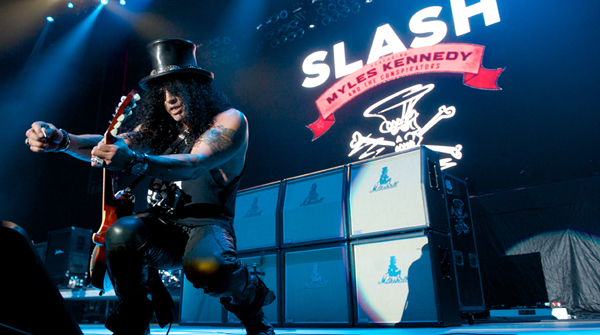 Slash has announced a series of one-night-only club shows in support of new album, "World On Fire", which will be released on September 16th via Slash’s own label Dik Hayd International.

“We’re excited to unleash ‘World On Fire’ in a big way and be a part of Guitar Center’s 50th celebration,” says Slash.

"They’ve been really supportive of me since the very beginning on the Sunset Strip.”

Fans can be a part of history as Guitar Center will present Slash featuring Myles Kennedy and The Conspirators “Live From the Roxy,” to be broadcast on national television on DIRECTV’s Audience Network (Ch 239) November 9th at 8pm.

The 90-minute full rock concert will be filmed in stunning 4k and 5.1 surround sound. Fans can enter to win a VIP trip for two to see The Roxy show and take home an Epiphone Les Paul signed by the legendary guitarist, visit guitarcenter.com/slash to win.