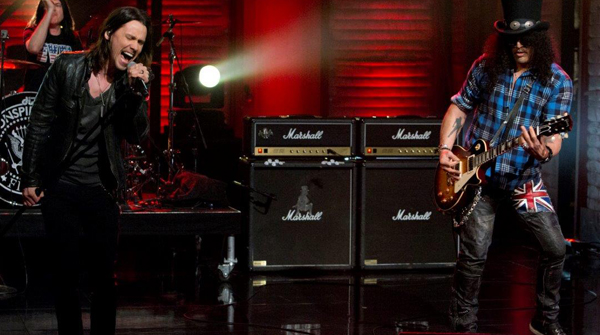 Slash and his band, Myles Kennedy and The Conspirators, have announced details of a month-long North America trek featuring headlining shows and festival appearances in support of "World On Fire" before heading across the pond to perform a handful of European dates.

The newly announced tour is the first in support of the new record, which is Slash's third straight solo album to debut in the US Top Ten and the second to feature Myles Kennedy and The Conspirators - Brent Fitz, Todd Kerns, Frank Sidoris (touring guitarist).

"The World On Fire tour has been nothing short of awesome,” says Slash, “so I can't wait to jump on these U.S. festivals in May. As well as mix in our headlining show for a bunch of dates along the way."

Check out Slash with Myles Kennedy and The Conspirators performing their new single "Bent To Fly” on Conan below.

Slash Featuring Myles Kennedy And The Conspirators - Bent To Fly