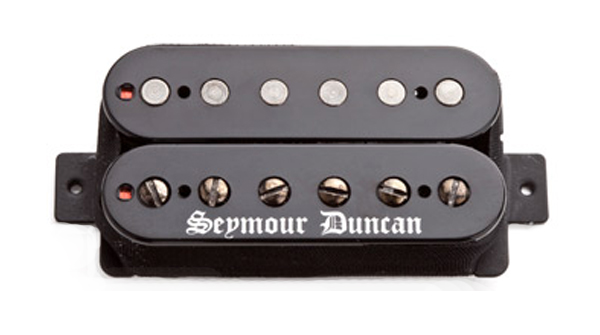 The winters in Scandinavia are dark, just like the metal thatcomes out of that part of the world. And sometimes, in capturing atone suitable for such blackness, guitarists need something witheven more grime and aggression; the right balance of mids, trebleand bass to instantly go from annihilating riffs to articulatelycutting solos. Three ceramic magnets and a special wind produce adistortion that is crushing with aggressive saturation in the midsand high-end.

Black Winter was initially developed for the extreme metalplayers of Scandinavia and made available in January of this year.Due to an upswell of calls for its full release, you'll now be ableto get Black Winter at your local music store or favorite onlinedealer. Black Winter's look matches its dark intentions: a blackbottom plate, black pole pieces and screws, red wire, and theSeymour Duncan logo in Old English font.

Available for 6-string guitars, you'll be able to get BlackWinter in either a bridge or neck version or as a completecalibrated set. For those whose guitar has a tremolo, you'll alsobe able to get Black Winter in a Trembucker version for maximumbalance.