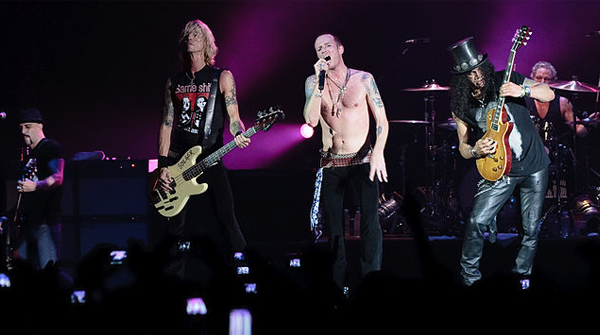 After remaining in a kind of hard-rock limbo for the past fiveyears, Velvet Revolver now appear to be closer toa reunion than ever before, according to ScottWeiland.

In a recent interview with Rolling Stone, the Stone Temple Pilot frontmansaid he may rejoin the supergroup .

"I am completely open to it, and I know there are other guysin the band that are completely open to it. There have been somethings that have stood in the way that aren't anything that have todo with the band. But now we're sorting through things, and we wantto start writing for some big film opportunities that have come ourway, and try to set things up the way we set things up when weinitially got together."

"I think it's the perfect time for Velvet Revolver to getback together. Slash has done some great things, and I look forwardto the opportunity to seeing him on my left and seeing Duff McKagan-- who, in my opinion, is without a doubt one of the greatest rock& roll and punk rock bass players of all time. And is still inamazing shape -- is more ripped than just about any 25-year-old onthe planet. And with (drummer) Matt (Sorum) and (guitarist) Dave(Kushner) as well, who are just incredible musicians. I thinkthat's exciting to look forward to. It's the old cliché, 'If thegods of rock want it to happen, then it will."

In related news Weiland also revealed that he hopes his soloband, which now goes by the name of Scott Weiland and theWildabouts, will get to work on a new studio album andalso plan to hit the road for a US tour.