Scott Gorham Discusses What He Loves About Gibson Les Paul 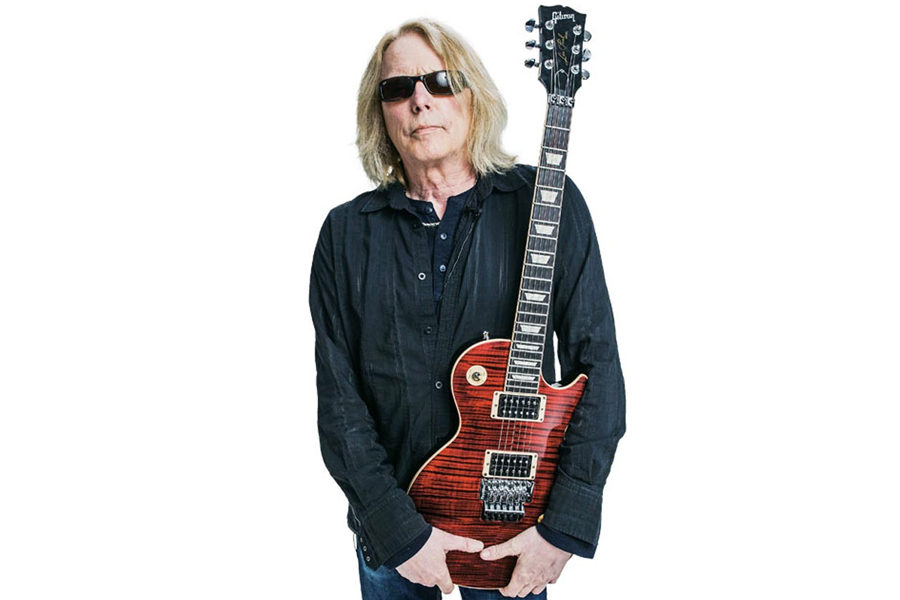 Since famously passing his audition for Thin Lizzy in 1974 to replace the departing Eric Bell, it’s fair to say that Scott Gorham has rightly earned the respect of his fans and peers alike. After he and Brian Robertson joined the famously turbulent outfit, the new look Thin Lizzy went on to enjoy their most critically successful period largely helped by the pair’s new found twin lead guitar style created by Gorham's Les Paul sound. It's this distinctive tone which featured heavily on albums such as Nightlife, Fighting and Jailbreak.

Gorham continued to tour and play with Thin Lizzy until they broke up in ’84 and he was pivotal to the band’s reformation in 1996 when former members played various tours in tribute to late founder, bassist and frontman, Phil Lynott. Over the last two decades Gorham has performed almost non-stop in various line-ups of Thin Lizzy as well as with his his hard rocking project, Black Star Riders.

Scott’s love for Les Paul began after he visited London’s Denmark St with his Thin Lizzy bandmate, Phil Lynott for the first time. After initially being refused due to the band’s tight budget, Gorham left with a Gibson Les Paul Delux ’69 with mini-humbucker pick-ups. Scott can be seen playing the guitar on the live disc which makes up Thin Lizzy’s 2-disc ‘Live and Dangerous’ album. However, it was unfortunately stolen from Scott in New York when he was recording the 21 Guns album and it was never returned.

The second noted Les Paul Gorham acquired was his '57 Gibson Les Paul in a 'Darkburst' ('Wine Red') finish (which he still owns). Scott was touring the US and had just finished performing a show in Boston with Thin Lizzy when he was paid a visit by a vintage guitar dealer who had six guitar cases with him. One of which contained the ’57 Gibson Les Paul that remained Scott’s main guitar until Thin Lizzy split in 1983.

Guitar Interactive caught up with Scott over the phone to discuss the future of Black Star Riders, his love for Gibson Les Paul plus his thoughts on his die hard UK fan base.

Gi. We covered Ramblin' Man Fair this year and caught you guys performing. We thought it was was awesome, how did you find it?

SG. We had a great time, a really great time. But as with all British festivals the only disappointment was the weather, we had some horrible weather, it fucking hammered it down all day long. So when you’re on a stage and you look out at the the crowd and the people look soggy as hell you almost feel sorry for everyone that’s out there you know. But in spite of all that I think everybody had a really great time and I’d like to thank everyone that was there watching us personally because with the weather and all it must’ve been torture.

Gi. Guess that’s UK Festival season all over right. Which brings us on to the UK. You tour and play a lot with Black Star Riders here, how important has the UK fanbase been to the success of the band?

SG. Well, extremely. It was the UK that helped kick us off so we’re kind of established here. It was difficult at first because we felt we really had to gauge how the crowds would respond after stepping out of the the Thin Lizzy limelight, but I guess that was always going to happen. Everybody has their favourite (Thin Lizzy) songs, and thats cool but now we’re doing a whole new set of new material. You’re thinking to yourself how many people out there have bought the album or even know the name. So to get in-front of the UK audiences and get the reaction we did on the first tour tour kind of gave us a jumpstart and the confidence to get out there tour the world. So, very important is the answer to that one.

Gi. That’s interesting. So was there any reason for this brief change over, were you looking to change your sound? Did you experiment with any other guitars at the time?

SG. Well, no not really, I mean like I said I floated over to the stratocaster for a while and that was because I was trying to change my guitar style away from the Thin Lizzy sound that I had developed with Phil, Brian and all the boys. So I figured if I grabbed a different guitar that made me play and feel a little bit differently it would put my head in a different space. Which it did and I’m still very grateful for that because I can apply that to how I’m playing with my Les Paul. So it was good to take a little bit of a break but it was even better to get back to playing my Les Paul.

Gi. We’ve found in studio work often it can be the Les Paul that’s the unsung hero of studio work. So whilst some artists may be playing other guitars live they’re actually using a Les Paul in the studio when they’re tracking records.

SG. That’s true and like I said earlier they are workhorses and very dependable you may try another guitar which sounds really thin or may have a tinny sound with no body to it. Also it kind of doesn’t really matter which configuration of ampage you use your always going to get a great sound of this (Les Paul) guitar. What I’ve noticed with other guitars is you can end up focusing too much on playing with the knobs or the amp, making the guitar sound good through mids and bass. But with the Les Paul you can pretty much just plug the damn thing and just play.

Gi. That brings us nicely on to amps. We read that you were looking at moving over to Marshall again after using ENGL amps for a while.

SG. Well I had been with Marshall for over 30 years before my move to ENGL but I had a problem at Wembley Arena one night when three of my heads just blew up. They just went and it wasn’t Marshall’s fault, or the amp’s fault, it was totally my guitar tech’s fault. But still there was a rep from ENGL there that night with Steve Morse and we had 45 minutes before the show was due to start so he helped us out. Straight off the batt I remember thinking the set-up he fixed us up with sounded really good, so I used them that night and I ended up staying with ENGL for about 3 or 4 years. But like with my guitar I slowly gravitated back to my old amp. If you think about it then it’s kind of a tough combination to beat, Marshall with a Gibson Les Paul.

Gi. So is it about time for a signature Scott Gorham Les Paul? And if so do you have a guitar which you would model it on?

SG. We’ve spoken about this idea for quiet some time but nothing has come of it. Although there is still talk so hopefully one day. If I were to have my own signature model then it would be based on my 57 Les Paul Standard which, to me, is such a beautiful guitar. On mine the body seems to be a little bit thinner and the weight is slightly lighter for some reason and it has such a nice thin neck which fits my hand great. I don’t even take it out on the road no more I see guys taking these 1959 Les Paul out on the road with them and I’m just like, that’s pretty brave. But I guess when you have ten of them it doesn’t really matter, does it?

Gi. So what other new things do you have coming up for the remainder of the for yourself and Black Star Riders.

After we get back from Japan we have a tour coming up in the UK in November. We’re doing ten shows in November and then at the start of next year in January we’re playing one of the rock cruises and then in March we’re heading to the US for a North American tour for 5 to 6 weeks with Judas Priest. So that’s going to be great. It’s a shame we can’t play with them (Judas Priest) in the UK or in Europe because that would be incredible.