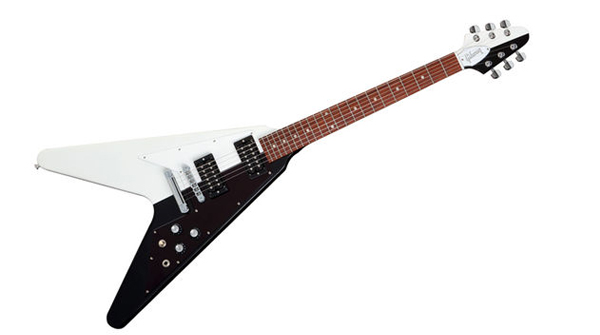 German guitar ace Rudolf Schenker'sroots run to the very origins of heavy metal, and there's no finerrock pedigree on the planet. Schenker founded legendary metaloutfit the Scorpions in 1965 when he was still in his teens, andthe band rose to world domination in one of music's mostcompetitive genres. Through it all, Schenker has been equally knownfor his blistering licks, incendiary tone, and radical style-soit's not surprising that the most revolutionary guitar evercreated, the Gibson Flying V, has remained his main squeeze formore than four decades.

Now Gibson USA introduces the Rudolf Schenker Flying V, a guitarfully loaded with the look, feel, and tone that took the Scorpionsto the pinnacle of rock achievement.

The Rudolf Schenker Flying V is immediately distinctive, withits timelessly innovative body styling and signatureblack-and-white finish in genuine nitrocellulose lacquer, but theappeal of this artist guitar runs far more than skin deep. Selecttonewoods, classic hardware, and two of Gibson's most successfulhumbucking pickups prime it for optimum performance. The guitareven nails the feel of Rudolf's preferred Flying Vs, with his ownfast custom neck profile and compact headstock shape. Experiencethe Rudolf Schenker Flying V for yourself at your authorized GibsonUSA dealer, and get ready to get heavy.

The Rudolf Schenker Flying V's body is crafted from solidmahogany in the seminal Flying V shape, first introduced by Gibsonin 1958. In addition to its radical rock styling, the shape yieldsa light guitar for enhanced playing comfort, yet superb tonalweight and body, with excellent sustain. The solid-mahogany neck iscarved in Rudolf Schenker's preferred profile measuring 0.775" atthe 1st fret and 0.900" at the 12th, and topped with a fingerboardmade from rich, dark Grade-A Granadillo hardwood.

More than just a pure metal machine, the Rudolf Schenker FlyingV is surprisingly versatile, thanks to its '57 Classic and '57 PlusClassic pickups (neck and bridge respectively). Crafted in theimage of the original hallowed PAF humbuckers, these pickups offerplenty of vintage-voiced warmth and depth--yet are updated forcontemporary high-gain performance, with loads of crunch andwailing lead tones on tap when you need them. They're routedthrough the traditional Flying V control section of two independentvolume controls, a master tone control, and a three-way selectorswitch.

The Rudolf Schenker Flying V is decked out in the time-testedcomplement of Tune-o-matic bridge and stopbar tailpiece, a hardwareset that has proven itself for both sustain and precisionintonation for more than five decades. They are accompanied byhigh-quality Grover™ tuners and traditional aluminum strap buttons.The "double wide" pickguard matches the distinctive black-and-whitepaint scheme; the guitar carries three black Top-Hat knobs withsilver inserts, along with a traditional Flying V truss-rod coverin four-ply white plastic with silver hot-stamped logo.

The Schenker Flying V has a recommended retail price of $2498(approximately £1630).