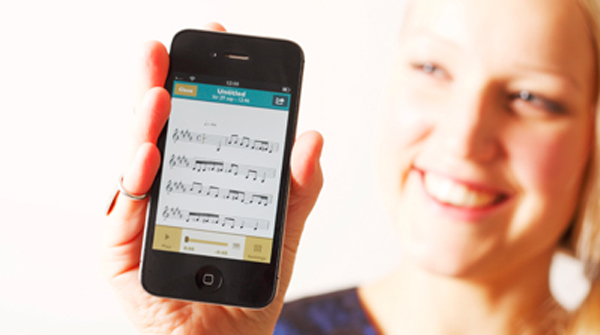 ScoreCloud offers breakthrough technology that will enable you to create, transcribe, arrange and collaborate on music more easily than ever before. Whether you are a composer, teacher, ensemble leader, or a keen amateur that loves to write music.

ScoreCloud will translate your performed music into accurate music notation in moments, with virtually no set-up required. Score Cloud´s advanced musical intelligence allows you more time to hear and express your music whenever you like, wherever you are.

DoReMIR Music Research AB, the world’s leading musical intelligence company based in Stockholm, Sweden, launches ScoreCloud with the goal of becoming the ultimate platform for notation-based music. DoReMIR’s unique technology enables users to capture and digitize their musical ideas efficiently and accurately. The technology behind the product is based on 20 years of research in music cognition at the Royal College of Music in Stockholm, seeking to explain how humans understand music at its most basic level.

"Our vision is to serve professional and accomplished musicians as well as a wide audience of music amateurs and lovers of music who never thought they could write a song. This product package is revolutionizing the way music is recorded and shared, with large success in Japan, Europe and South America,” says Bengt Lidgard, CEO of DoReMIR.

All of these in combination are a step towards the ultimate platform for music creation where it is easy for anyone to compose and thereafter communicate and collaborate with students, group members, friends and fans.

ScoreCloud Studio is a notation tool that enables musicians, composers, teachers and ensemble leaders to notate music instantly while they play. Unlike other notation software, it is truly plug & play, converting live performances to accurate notation in real time, with absolutely no training required - like a “Google Translate” for music.

ScoreCloud Express is the ground-breaking iPhone app that enables you to enter a monophonic melody directly into your phone and get music notation at once. Whenever you feel you have a song in your head, just open the app and sing into your iPhone – it immediately produces the music in notated form, ready to be developed further. When first launched, the app reached global success and was honored with the Golden Lion in Cannes in June 2013 for the best app in the category of Music and Entertainment.

ScoreCloud – Sharing your work with others

All of your songs, no matter where or when you create them, can be stored in a cloud-based solution which allows ScoreCloud users to further develop and share their work with others. Sheet music is a worldwide language, and this allows the ScoreCloud users to communicate with other musicians, professional or amateur, on even a global level. Music can now literally be created by anyone, collaborated on and shared with everyone.

Find out more at ScoreCloud