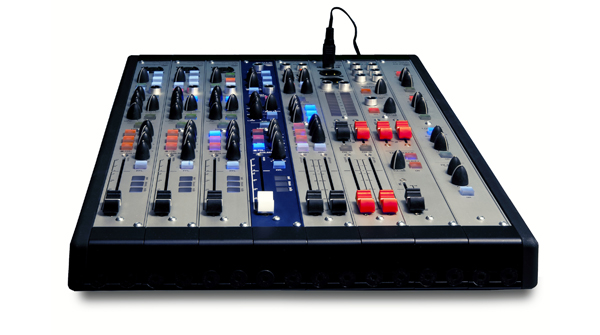 (PRESS RELEASE): At this year’s Frankfurt Musikmesse, Swiss manufacturer Schertler unveils one of the company’s most exciting products to date: The Arthur Format48 mixer is a groundbreaking new modular mixer that can be designed and built by the user, offering a degree of flexibility that represents a “first” in the market.

The mixer can be created from a choice of eight different Class A input and output modules. These include a Mic Input unit, Yellow instrument input unit, Stereo Input unit and Spring Reverb unit, as well as L/R Master, EQ Master, Aux Master and external Power-In units. The units, which can be combined in any order and quantity, contain all the standard features you would expect to find on other mixer channel strips, as well as some more innovative functions for enhancing workflow and ensuring best possible sound quality.

Arthur’s electronic design is also groundbreaking: The complete absence of negative feedback (NFB) from input to output represents another “first”. All filters and summing amps (which many electronic designers consider unthinkable without NFB) are free from restricting back loops in the mixer’s straightforward high-speed design. This results in an ultra fast response and a natural attack, neither of which is achievable with NFB circuitry. All circuits are built using discrete components (in Class A) and pure high-voltage DC-amps (without any capacitors in the signal path), offering 30dB headroom and low noise, as well as unparalleled stability, warmth and transparency.

Combining the various mixer modules is a straightforward process involving a series of connecting rods and hexagonal screws. Users have total freedom to design their own personal channel sequence, as there are no mechanical or electrical restrictions. The number of units that can be included depends the power supply used: For simpler combinations of 8 or 16 units, there is a choice of two compact power supplies. A further high-end power supply is also available for use with any combination of units ranging from only a few to as many as 60. (For larger combinations, Power-In units are also required.)

Once Arthur has been built, the user still has freedom to customize the unit sequence and add further units, should additional mic- or instrument inputs be required for example.

“We are very proud to be unveiling the Arthur Format48 mixer at Musikmesse,” says Schertler Group CEO Stephan Schertler, who also designed the mixer electronics. “While Arthur may not offer all the features of a large studio console – indeed it is not designed for that - its sound nevertheless outperforms many of the more established mixing consoles. Furthermore the mixer’s flexible configuration makes it a perfect tool for use in both professional and amateur capacities, for studio recording or live applications and with small or large groups of performers. The possibilities are practically endless.”

Arthur is expected to ship during summer 2016.

For more information on Schertler's The Arthur Format48 Mixer