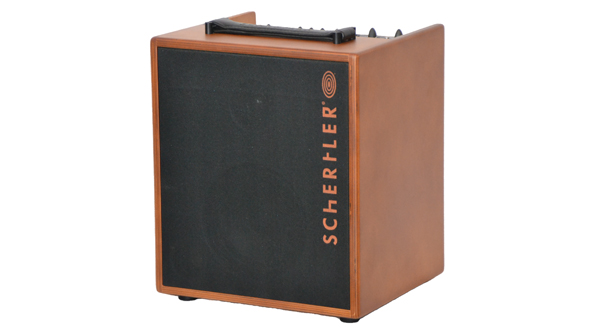 (PRESS RELEASE): Swiss manufacturer Schertler adds to its family of “next generation” acoustic amplifiers with the release of the new DAVID, a compact 3-channel amp that combines a wealth of new features and updated technology with a new "look".

Equipped with a 1" dome tweeter and 6" woofer, DAVID essentially offers 100W (30W + 70W) of bi-amplified power. However, improvements to the amp’s acoustic construction have led to an increase in its internal air volume, an optimization of the bass reflex construction and a larger power supply, resulting in actual sound pressure levels that are typical of more highly powered amps.

DAVID’s inputs will accommodate a microphone, an instrument and a stereo device such as a computer, MP3 player or CD. The instrument input and the Jack input on the microphone channel both feature a Bootstrap technology that enables the input to automatically adapt to any impedance. Both main inputs have a Gain control for input sensitivity regulation. The instrument input has 3-band EQ and a warm filter. The microphone input also has 3-band EQ with a switchable resonance (notch) filter (240Hz/150Hz). Phantom power is supplied for condenser and electrostatic microphones.

DAVID's controls additionally include a new adjustable DI Out in the master section, a new mute switch and overload LED for each channel. A new digital reverb replaces the spring one found in Schertler's original David amplifier models. DAVID is also equipped with a high voltage CLASS-A preamp that has no integrated circuits and No Negative Feedback (NFB).

DAVID’s release follows hot on the heels of its smaller series sibling GIULIA Y, which shipped during the summer. “This new family of compact acoustic amplifiers takes our technology to the next level”, says Schertler’s Sales & Marketing Manager Drago Dujak. “In re-designing the models, we have taken the best features from our existing amplifier ranges and have added enhanced circuitry and new features for even better sound quality and usability.”

DAVID is available from the Schertler online store (Europe, USA and Canada only), or from Schertler showrooms and distributors worldwide.

For more information on Schertler's DAVID