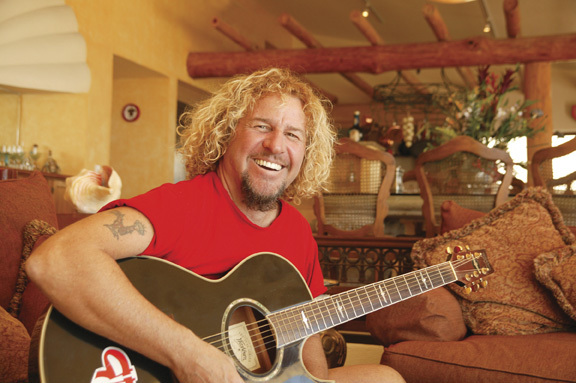 Sammy Hagar has announced his plans for his 'Four Decades Of Rock Show'.

2013 will mark 40 years since the release of the debut Montrose album with Sammy Hagar on vocals, and the Red Rocker has announced what may be the first of many retrospective dates to celebrate his four decades in rock.

The only date to be announced so far will take place on September 1 at Lake Tahoe Outdoor Arena at Harvey's in Stateline, Nevada.

Hagar announced on his website that the show will begin with his current band the Wabos, then bassist Michael Anthony will join him for a set of Van Halen tunes (billed as "The Other Half"). After an intermission, Hagar will lead a tribute to Montrose, with Denny Carmassi and Bill Church, along with Joe Satriani filling in for the late Ronnie Montrose. Then, "if we get an encore," Hagar writes that Anthony, Satriani and Carmassi will join him for some Chickenfoot tunes.

As Hagar says, "This is a prototype to the type of thing I want to take on the road next year so I promise it to be the party of a lifetime!"

For tickets and further details go to Sammy's website here

Last Friday Sammy Hagar was back with Bill Church and Denny Carmassi from the original Montrose to perform a tribute gig for the late Ronnie Montrose, who took his life on March 3.

In a recent statement Hagar announced, "One of my top priorities this year was a Montrose reunion. Ronnie and I planned to do it in Cabo in October. I am so sad it won't happen, but on April 27th, Joe Satriani, Denny Carmassi, Bill Church and I are going to play the hell out of some Montrose!"

It happened last Friday at the Regency Ballroom in San Francisco. Joe Satriani filmed in for Ronnie's guitar parts.

Watch a performance from the show below