Rush's Geddy Lee Discusses Life on the Road as a Musician 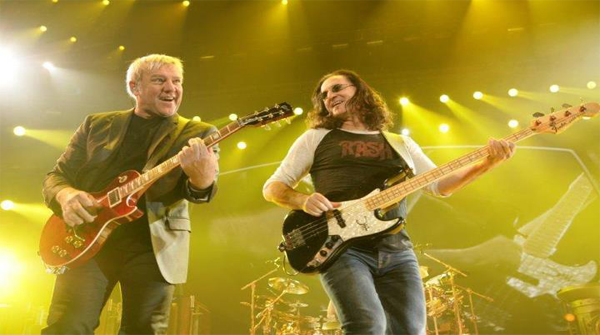 Rush's Geddy Lee Discusses Life on the Road as aMusician -

Canada's biggest prog-rock exports, Rush willkick start their 'Clockwork Angels' world tour today (7th Sept) andwill continue until December. The band will then take a break untilMay (2013) before crossing the pond to embark on the European legof the tour.

As the trio prepare for the colossal North American and Europeantrek the band's influential bassist and frontman, GeddyLee spoke with Grammy.com about life on the road as amusician:

"I find it more stressful than when I was younger. Ithink the physical part of it takes its toll on me, and the otherguys I know for sure," says Geddy.

"Staying healthy becomes a more difficult challenge,and as the tour winds on, nerves fray in a different way than theyused to. Although, you have more confidence than when you wereyounger, and more command of your instrument [and], as a result,more command of your audience's attention, which makes it easier.There is kind of a physical price you pay as the tour winds on,whereas when I was younger I could be in almost any condition, getout there and bang it off. I'm grateful for the audiences that wehave, wherever we go. But it's a difficult thing for me to do rightnow."

Lee also spoke about the longevity of the band and how they'vemanaged to stay together and successful for so long.

"There's a particular obvious chemical reaction wehave with each other as players. We all like making the same kindof music, which I think is the one thing that kills a lot of bands:the fact that their tastes start changing, and the thing they wantto put in their music is not something the other guys agree with.We don't have that problem here.

The other thing that breaks up most bands isinterpersonal relationships. We don't have that problem either,because we do get along well and we respect each other. Most of thetime the biggest concern we have is, who is going to say somethingfunnier? Where we get into one-upmanship is in the comedydepartment, not the music department. I think those things combinedhave really helped keep this band going."

Find out what else Geddy had to say about life on the road andon Rush's lasting impact on the world of music at Grammy.com.