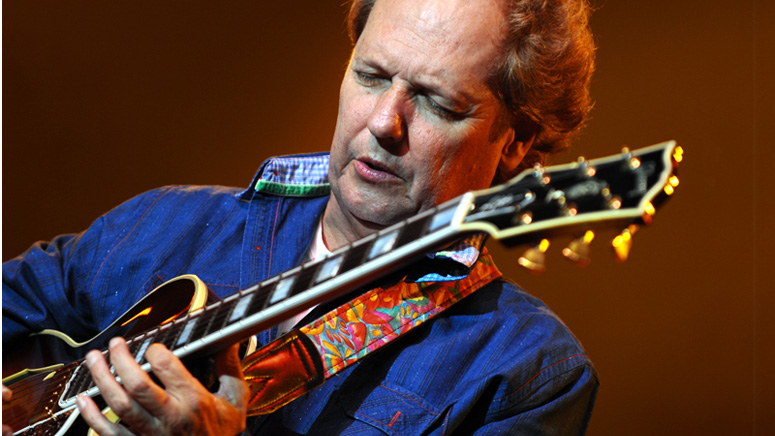 On Saturday 27th July, Legendary Jazz Venue RonnieScott's, will present a unique opportunity to get up close andpersonal with a true guitar legend - Mr Lee Ritenour.

The afternoon session will comprise Lee talking about hiscareer, demonstrating some of his guitar techniques followed by aQ&A session at the end. Lee will also be playing at the clubwith Dave Grusin & Friends from 25th - 27th July (Full detailsbelow).

In a career that spans five decades and more than 40 albums,guitarist Lee Ritenour has developed a keen understanding of thesymbiotic balance between the frontman and the supporting players,between the wisdom of experience and the enthusiasm of youth.On Rhythm Sessions, his newalbum set for release on Concord Records on September 25, 2012,Ritenour surrounds himself with a cadre of high-profile veteransand promising newcomers - all of whom reaffirm the vital roleplayed by the rhythm section in any worthwhile musicalendeavor.

"I always thought it's a very cool model to combine verywell-known, almost legendary players with completely new talent onthe same record," says Ritenour. "I love that scenario. It's not aformat that many people have followed before, but I've alwaysconsidered it a fascinating experiment, and a way to create somegreat sounds."

The most recent result of that ongoing experiment is an albumthat embraces a variety of sounds and grooves, all rooted in jazz,but also layered with shades of funk, R&B, Latin, world musicand more. The album's sense of variety stems from the eclecticsource material. Some songs were penned by Ritenour, while otherscome from heavyweights like Herbie Hancock, Dave Grusin, ChickCorea, EST and Nick Drake

"I wanted the various rhythm sections assembled for this album -the guitar, keyboards, bass and drums - to be very organic," saysRitenour. "The songs I wrote for this project were written withthese different musicians in mind, and the songs I picked by othersongwriters brought to mind certain players as well. So while myname may be on this record, it's as much about these other playersas it is about me."

Ritenour's previous recording, 6 StringTheory, had focused primarily on guitar by featuring theinternational winners of his 2009 guitar competition. However, inkeeping with his ongoing commitment to discovering and mentoringnew talent, he quickly realized that there was so much ground yetto be covered. "There are just so many great piano players and bassplayers and drummers out there, so when it came time tomake Rhythm Sessions, Ithought, 'Why not make a record featuring some of those greatplayers, and then extend the contest to include the rhythm section,and let the young rhythm section winners make an appearance on therecord?'"

This mix of seasoned players with newcomers results in amulti-layered, multi-textural and extremely engagingrecording. RhythmSessions leads off with "The Village," an exoticworld-beat track that Ritenour wrote and arranged only after he'dsecured his "dream team" rhythm section. "I had been travelingquite a bit, and still trying to book the various rhythm sectionsfor the record while I was still on the road. I was able to bookDave Weckl, George Duke and Stanley Clarke, but the only time theywere available was the week after I contacted them. I didn't haveany music prepared for them, so I ended up writing a song with themin mind. The tune came together very quickly as this 12/8 Africanshuffle."

The follow-up, "River Man," was written by the late Englishsinger-songwriter Nick Drake and is one of two vocal tracks on therecord, this one featuring Kurt Elling. "I kept hearing Kurt'svoice for this tune, and it ended up being a perfect fit," saysRitenour, who arranged Grusin, East, drummer Will Kennedy andhimself behind the vocal track. Ariel Mann provides additionalassistance with synth and programming, not just here but on almostevery other track on the record. "When you dig a little deeper intothe accompaniment behind Kurt's voice, you hear a beautifullyarranged track. It surrounds him in all the right ways. I feel likeit has the quality of a modern standard."

The gentle "Children's Song #1" is a cover of the opening trackfrom Chick Corea's 1984 opus, Children'sSongs, but with plenty of embellishment from Ritenour. "Itook a big gamble and wrote a completely new section in the middleof the song," he says. "It starts out with Chick's main theme, andthen morphs into my extended section, then goes back into the mainmelody. The version I used as a reference was the original versionrecorded by Chick and Gary Burton on vibes. The vibraphone and theguitar have some similarities, so I knew it would make a lovelyacoustic guitar piece. Chick ended up loving the arrangement."

The edgy but hopeful "Maybe Tomorrow" is borrowed from the canonof the Welsh rock group Stereophonic. "The song was a huge hit by agroup whose sound has nothing to do with what you'd usuallyassociate with Lee Ritenour," says Ritenour. "But I heard thisgreat melodic hook, and I heard this really cool groove, so wearranged it with a slightly funkier edge with a rock guitar sound.I just kept hearing my South African friend, Zamajobe - who is abig star down there - as the singer for this track. She did aterrific job with this."

"I wanted to bring as many voices as possible into this record -some well established, some brand new, and tie it all together withthe guitar sound that I feel has become my trademark," saysRitenour. "I put some serious time and love and care into myrecords. They are projects that I never take lightly. They're tooimportant to me. I hope people get that out of my records,especially this one."

Indeed, the love and care invested in RhythmSessions have been a hallmark of every projectthat Ritenour has ever been a part of, which has resulted in acareer that legends are made of. Since his early recordings in the1970s, he has earned a GRAMMY Award and 19 GRAMMY nominations,numerous #1 spots on guitar polls, a Lifetime Achievement Awardfrom the Canadian SJ Awards, and a prestigious "Alumnus of theYear" Award from the University of Southern California. He hasrecorded more than 40 albums that have yielded 35 chart songs. As ayoung guitarist, he put his combination of diverse musical stylesand brilliant technical chops to work in more than 3,000 sessionswith a broad spectrum of artists - beginning with the Mamas andPapas in the late '60s and also including Pink Floyd, Steely Dan,Dizzy Gillespie, Sonny Rollins, Simon & Garfunkel and FrankSinatra. In the 1990s, he was a founding member of Fourplay, whichis considered the most successful group in contemporaryjazz. Rhythm Sessions,the latestchapter in Ritenour's continuously unfolding story, is acelebration of the synergy and energy that emerges when a brilliantand innovative guitarist surrounds himself with a combination ofthe greatest musicians of our time and an up-and-coming generationof soon-to-be-great talent.

"I'm at a point in my career where I'm marshalling all of myskills and experience over 40 years and really putting it all intoan album like RhythmSessions,"  he says. "I've always lovedworking with great talent, and at the same time finding new youngtalent and opening doors for them. I want to take as manyopportunities as I can to give something back as a way ofexpressing my thanks for all that's been given to me."

For more info or to buy tickets for Centre Stage: AnAudience with Lee Ritenour visit: www.ronniescotts.co.uk

For more info or to buy tickets visit: www.ronniescotts.co.uk