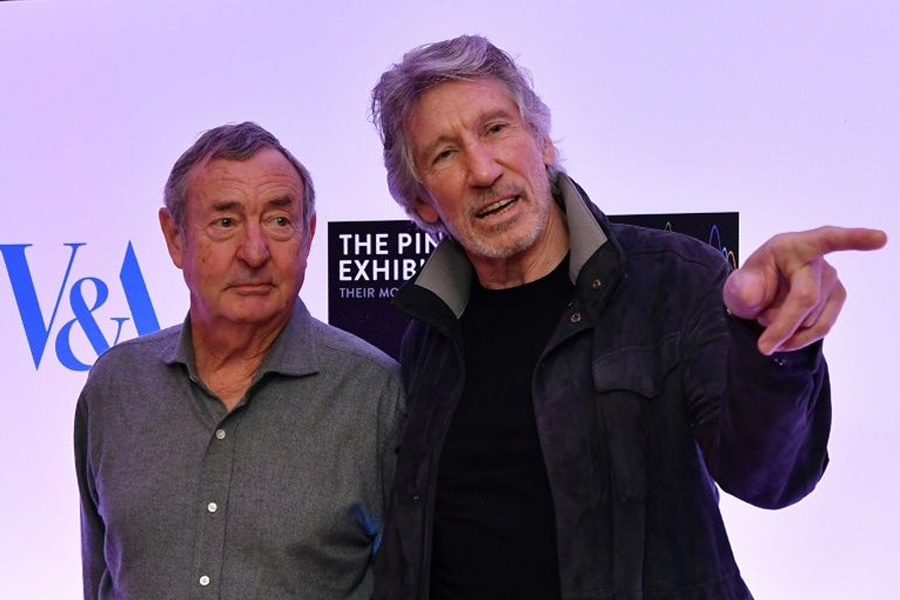 On Thursday 16 February, Pink Floyd’s founder members Roger Waters and Nick Mason made a rare public appearance together at London’s May Fair Hotel at a media briefing and Q&A session for The Pink Floyd Exhibition: Their Mortal Remains. The two old friends discussed for the first time the objects in the exhibition, which opens on 13 May at London’s Victoria and Albert Museum. Tickets for the exhibition, promoted by Michael Cohl and Iconic Entertainment Studios, are on sale now via the V&A and other ticketing partners.

The Victoria and Albert Museum will host The Pink Floyd Exhibition: Their Mortal Remains between 13 May and 1 October 2017. This major international Pink Floyd retrospective marks the 50th anniversary of the band’s first album, The Piper At The Gates Of Dawn and debut single, Arnold Layne.

The Pink Floyd Exhibition is created in partnership with the V&A by Pink Floyd’s creative director Aubrey ‘Po’ Powell (formerly of the design partnership Hipgnosis) and Paula Webb Stainton, who worked closely with members of Pink Floyd. The V&A curatorial team is led by Victoria Broackes, Senior Curator, with Anna Landreth Strong, Curator, Department of Theatre and Performance. The exhibition is a collaboration with designers Stufish, the leading entertainment architects and the band’s long-serving stage designers.

The Pink Floyd Exhibition: Their Mortal Remains is anchored by a chronological trip through Pink Floyd’s history, connecting with music, art and design, sound technology and live performance: from their beginnings on the underground club scene in 1960s London to the present day, via landmark albums such as The Dark Side Of The Moon, Wish You Were Here, Animals, The Wall and The Division Bell, and their accompanying imagery, stage shows, design and technology.

Every chapter of the Pink Floyd story is represented, with more than 350 objects and artefacts on display, many of them never before seen, including hand-written lyrics, musical instruments, letters, original artwork and stage props, accompanied by objects from the V&A’s collection of art, design and performance. Some of these items had been long-held in storage facilities, studios and personal collections for over 40 years, before being re-discovered.

The entry point into The Pink Floyd Exhibition is a replica of the Bedford van Pink Floyd used as their touring vehicle in the mid-1960s. From this first moment, the visitor is immersed in Pink Floyd’s world. Emerging from the vehicle, they will find themselves transported to Swinging London and the UFO club, the home of the capital’s psychedelic music scene, where Pink Floyd became the unofficial ‘house band’ during the early part of 1967. This exhibit includes atmospheric oil and light show projections created by Pink Floyd’s 1960s-era lighting designer, Peter Wynne Willson, which, together with the accompanying soundtrack, ensures a fully immersive experience.

Art and technology are also celebrated. Included is an original painting by Syd Barrett, who studied art in London and his hometown of Cambridge before becoming a full-time musician. Also featured is the Azimuth Co-Ordinator, from the V&A’s own collection, the custom-built device used by Richard Wright to pan the group’s live sound, via a joystick, around any given venue. The ground-breaking device played an integral part in Pink Floyd’s theatrical live performances at venues including the Royal Festival Hall and Royal Albert Hall in the late 1960s as well as being used in the recording of the clock montage for ‘Time’ on The Dark Side of the Moon.

Also included are Pink Floyd’s soundtracks for the art-house movies, More, La Vallée and Zabriskie Point; musical projects undertaken alongside their studio albums. Having abandoned the concept of releasing singles at the end of 1968, these film soundtracks show the band exploring alternative media for their music. Together with the performance art aspects of their live shows, the exhibition illustrates Pink Floyd’s experimentation with multi-media work.

Pink Floyd’s journey through the 1970s saw them embracing studio technology and using all the resources at their disposal at EMI’s Abbey Road Studio on albums such as Meddle, The Dark Side Of The Moon and Wish You Were Here. Several instruments used on these albums are displayed here, including David Gilmour’s famous Stratocaster, nicknamed ‘The Black Strat’, which has been used on many Pink Floyd tours since making its debut at the 1970 Bath Festival Of Blues And Progressive Music.

The now world-famous artwork for 1973’s The Dark Side Of The Moon was created by Hipgnosis, the design partnership comprising exhibition co-curator Aubrey ‘Po’ Powell and the late Storm Thorgerson. Hipgnosis’ work is on display throughout the exhibition, alongside artwork and stage designs created for the band by others, including Gerald Scarfe and the late Mark Fisher.

These artefacts plot both Pink Floyd’s development as a spectacular live band, but also the broader social, cultural and political threads which ran parallel to their music. Among the many iconic set pieces on display is a celebration of architect Giles Gilbert Scott’s Battersea Power Station, the building immortalised on the cover of Pink Floyd’s 1977 album, Animals. Roger Waters’ lyrics on Animals were a critique of social inequality and capitalism, but Pink Floyd were also a target for many younger, up-and-coming punk rock groups at this time, as encapsulated by Sex Pistol Johnny Rotten’s famous customised ‘I Hate Pink Floyd’ T-shirt.

In 1979, Roger Waters conceived The Wall which explored childhood alienation, the Second Worlds War, the loss of his father, through to the rights of passage of a rock star. The album’s striking artwork and its grotesque cast of characters, including a cane-wielding schoolteacher, were created by cartoonist and illustrator Gerald Scarfe.

These characters were then re-imagined by Mark Fisher as huge inflatables in the subsequent Wall stage show which Stufish has re-created for the exhibition. Revealed in The Pink Floyd Exhibition is the inspiration for the schoolteacher. Included in the exhibition is the cane used by the headmaster at the Cambridge and County High School for Boys on his pupils, Roger Waters, Syd Barrett, and future collaborator Storm Thorgerson and a punishment book detailing the dates and reasons for the beatings.

The scale and ambition of Pink Floyd’s imagery and live shows continued in the 1980s and ‘90s with world tours for the A Momentary Lapse Of Reason and The Division Bell albums. The exhibition salutes this scale and ambition with a specially reconstructed suit of lightbulbs worn by a model on the cover of the 1988 live album, Delicate Sound Of Thunder, and the original giant ‘talking heads’ designed by Storm Thorgerson for the sleeve of 1994’s The Division Bell.

Audio specialist Sennheiser is the official audio partner of the exhibition, enabling captivating audio experiences through its AMBEO 3D audio technology. Sennheiser systems will be used for all audio elements and throughout The Pink Floyd Exhibition: Their Mortal Remains, including the delivery of highest-quality arrangements from Pink Floyd historic audio documents. A perfect fit, as the band has been using Sennheiser and Neumann audio equipment throughout their career, starting with the legendary Sennheiser MD 409. The exhibition will culminate in an upmix of Comfortably Numb from the Live 8 concert – the last time the band played together. This will create an AMBEO 3D audio experience (18.3) that places sound around the listener, delivering an immersive sensation unlike anything visitors will have encountered before, very much the pioneering spirit of Pink Floyd.

The Pink Floyd Exhibition: Their Mortal Remains is an audio-visual journey through 50 years of one of the world’s most iconic rock groups, and a rare and exclusive glimpse into Pink Floyd’s world. The exhibition opens on 13 May 2017 for 20 weeks. Tickets are on sale now.