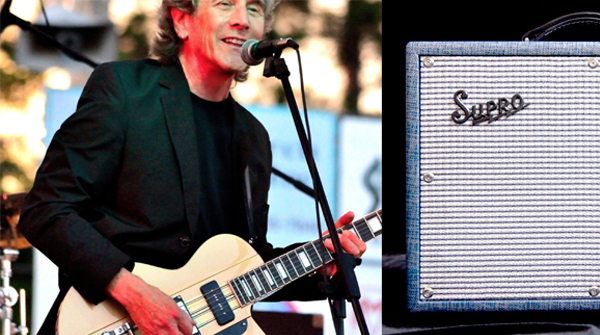 Grammy-nominated guitarist and performer Rick Vito starts kicks off his German tour this Thursday and has chosen two Supro Tremo-Verbs (1622RT) for his sound.

"I’ve always been an admirer of the “Supro sound,” says Rik, "and have used my old collection of vintage Supro amps (and guitars) extensively throughout my professional career. Now, Supro has again come to the spotlight with their new line of tube amplifiers which draw their magic both from the classic “vintage” sound, and also add subtle new features that allow the contemporary player greater versatility in tone and output. In keeping things traditionally pure and simple, Supro has managed to retain the unique, soulful personality of the original amps.”

The 1622RT Tremo-Verb is a feature-rich update to the coveted late-60’s Supro 1×10 combo platform. This compact, Class-A, 6973-powered bruiser pushes a LOUD 25 watts through Supro’s custom-made 10” speaker to capture the old-school Supro magic in an amp you can easily haul around to gigs. Tremo-verb is, without a doubt, pound-for-pound the most potent tube amp in the Supro line.

The Tremo-verb’s feature set, blue rhino hide tolex and compact physical dimensions are drawn from the original combo of the mid 60’s, with its power plant borrowed from its larger brother, the 1624T Dual-Tone. This modern incarnation of the Supro Tremo-verb has been enhanced with enough Class-A power to gig out alongside a pounding drummer and bassist.

Following traditional Supro fashion, the new Tremo-verb’s power-tube tremolo comes after the reverb pan, lending an ethereal shake and wobble to the enveloping wash of tube-driven spring reverb. This amp has ample headroom to use with pedals, maintaining exceptional clarity and sparkle even above 12-o’clock on the volume knob as the amp rolls over into glorious all-tube overdrive.

Rick has been active in the music industry since the 1970's, having worked as a solo artist, songwriter, session musician, and as a member of the bands of John Mayall, Bonnie Raitt, Bob Seger, Jackson Browne, Roger McGuinn and many other R&R Hall of Fame artists. He is probably best known as an official member of Fleetwood Mac from 1987 to 1991, and more recently as the frontman for the Mick Fleetwood Blues Band. Rick is also the recipient of the W.C. Handy Award and has 8 solo CDs and 2 solo DVDs in his long list of credits.

Catch Rick at the following venues: