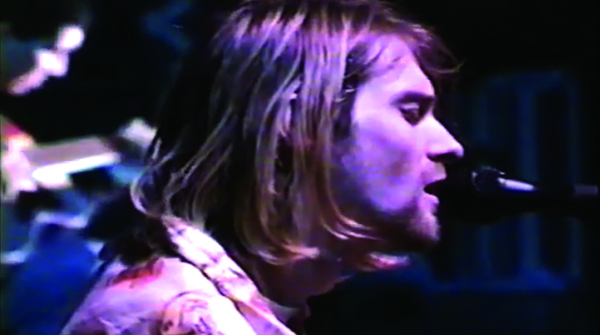 The source of the film, which was shot in December 1993 during a gig at Los Angeles' Great Western Forum, is documentary maker Dave Markey, who was a close friend of the band.

Nirvana were in the midst of touring their third and final studio album 'In Utero' when, just four months later, Kurt Cobain would tragically take his own life.

The footage, which you can watch above, includes performances of 'All Apologies' and Nirvana's famous cover of David Bowie's 'The Man Who Sold The World'.

On the video, Markey wrote:

"20 years ago tonight (December 30, 1993) I stood on Kurt's side of the stage at my hometown's Los Angeles Forum and captured the last set I would see of this band. A band that I had worked with, toured with; people that I would call my friends. A band that both the world and myself really loved (can't really say this has happened since). Within just a few short months it would sadly all be over. I'm glad to have documented this show, as well as their pre-fame fun in 1991."

In related news the city of Hoquiam in the North American state of Washington(Cobain's home) has declared that April 10, 2014 will be 'Nirvana Day'. The day will honour Nirvana's induction into the Rock And Roll Hall Of Fame, which also takes place on April 10 of next year.