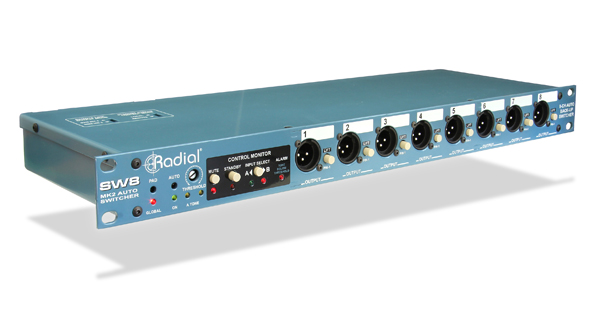 The SW8 is designed to switch 8 audio channels simultaneously. Backing tracks are recorded on two separate systems and each is sent to the SW8 where the user may manually select between the playback systems or have the SW8 automatically switch between them when a drop-out occurs via an internal gate. Inputs include a choice of 1/4" TRS or 25 pin D-subs. The outputs can be via a series of transformer isolated low-Z XLR outputs to run through a snake system or a D-Sub.

According to Radial's President Peter Janis: "Over the past several years, the Radial SW8 has gained tremendous market penetration with major tours such as The Eagles, Rush, Rihanna, Maroon 5 and Cirque Du Soleil using it along with being employed in a wide variety of permanent installations to provide safety backup. During this time we have had many discussions with the technicians who use the SW8 on a daily basis. This input has driven us to develop a next-generation switcher that will elevate the performance in several key areas such as managing standby status more effectively, muting the main audio outputs to enable on-the-fly editing and providing remote controllability with LED status indicators."

New features include: A 'standby' function that enables the technician to stop the show in between songs when the artist chooses to speak to the audience. A global mute turns off all outputs allowing the tech to monitor playback tracks and prepare playback cue points. Two signal status LEDs have been added for both A and B playback systems providing visual indicators to show signal present. External remote control options now include either a footswitch or desktop options with LED status indicators. To help eliminate switching noise with less than ideal sources, a series of filters have been added on all channels. Gate level controls have also been relocated to the front panel for easier manipulation.

The updated SW8 is now shipping.