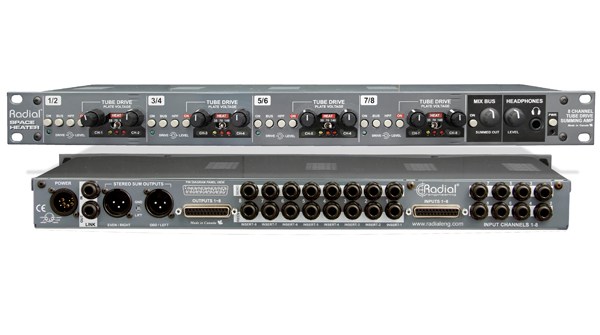 The Space Heater is an eight channel tube summing mixer with high voltage tube overdrive. Company President, Peter Janis: "We first showed the Space Heater over a year ago and anticipated delivery mid-way in 2014. As we got closer to production, we discovered anomalies with tubes that were beyond our control. This forced us to pull back the product and redesign the circuitry to accommodate.  To understand the problem you have to start by understanding the Space Heater's circuit. 12AX7 tubes have two filaments inside that enable us to drive two channels using a single tube. The original design was configured with a single input and output control for each channel pair or each tube.  During beta tests, we discovered that the output from each side of the tube can vary significantly depending on the filament. And although the user could perform gain make-ups in a workstation or via a recording desk, we felt that having individual inputs and outputs for all eight channels would be a much smarter option. This of course sent the design back to R&D where the circuit was redesigned and new dual concentric potentiometers had to be custom made to suit."

Designed as a character box, the Radial Space Heater packs eight tube channels into a compact, single 19" space with individual drive and output for each channel. A 3-position 'HEAT' switch enables the user to switch from 35, 70 or 140 volts to dial-in a touch of distortion or go over the top with full saturation. Each channel may be used individually or all eight channels may be mixed to a stereo bus. This, for example, could be used to fatten up the sound of a drum kit. A built-in headphone amp is available for monitoring or trouble shooting.  Connections to and from the Space Heater are supported with both balanced ¼" TRS and 25-pin D-subs along with XLRs at the master output.

Janis continues: "Distortion is often thought of as an effect as made famous by acts as diverse as the Beatles and Nine Inch Nails. But what few realize is that distortion can also be used in a very subtle way to add character to a vocal track or accentuate a bass giving it more presence without increasing the level. It also has tremendous appeal for live performers who employ in-ear monitors. The Space Heater can be set to act like a natural limiter by clipping transients which in turn will make in-ear monitors sound more natural.