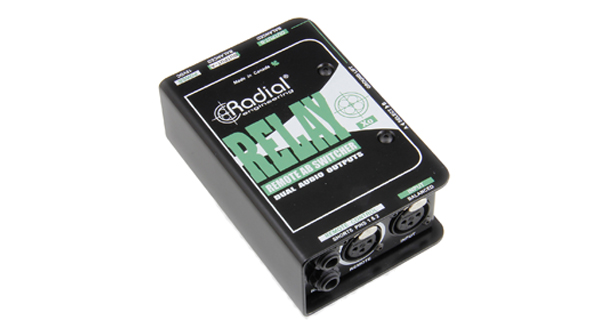 According to Radial's Central Regional Territory Manager, David 'Shuu' Guidish: "Before joining Radial, I spent over 17 years on the road as a guitar tech. During this time, it became abundantly clear that a guitar switching system must be easy to use, quiet, dependable and bullet proof to handle the rigors of professional touring. When designing the JX62, the Radial R&D team discussed the feature set with me, along with a number of other touring pros, before putting the pieces together. The combination of a guitar switcher with built-in DI boxes for acoustics and bass, along with an amp switcher and tuner out, truly makes the JX62 a unique and essential piece of gear."

The Radial JX62 begins with six guitar input channels, each of which is outfitted with ¼" input and a thru connection to feed its own amp or dedicated direct box.  A simple ON switch activates the channel and a recessed 'set & forget' TRIM control enables the guitar technician to set all of the levels uniformly should the output from the guitars or wireless systems need adjustment. All channels may be used at once. The trim control on inputs 1 & 2 plays double-duty whereby it can be turned into a DRAG control - to instead adjust the load when using a wired connection to a magnetic pickup. This follows the same award winning class-A circuit topology as used on the Radial JD7 which is used by guitarists such as Carlos Santana, Neil Schon, Steve Vai and John Petrucci.

Channels 5 & 6 are further equipped with a built-in Radial direct box that can be used for acoustic guitar, electric bass or even for multi-instrumentalists that may have a banjo, mandolin or violin on stage.  This signal may be routed to feed either the direct out, the main AB bus output or both. The direct box output is transformer isolated to eliminate noise and equipped with a polarity reverse to help reduce feedback on stage.  In order to provide the guitar tech with greater control, a PFL (pre-fade listen) switch on each channel routes the signal to a headphone amp and tuner output. This lets the tech check the signal from the guitar before handing it off to the artist. A master mute switch can be engaged between sets to turn off all outputs other than the PFL/tuner.

The JX62 rear panel is fully loaded with stacked in/thru connectors on all input channels plus balanced XLR outs on channels 5 & 6. An effects loop with separate send and receive jacks enable the tech to insert a pedalboard in between the input channels and the two guitar amp outputs. Two ¼" outputs are used to feed two amplifiers along with separate XLR outputs to feed the PA system for acoustic instruments. These can also be used to feed the balanced input of a digital processor such as an AxeFX or Line-6 device.  A simple AB select switch on the front panel is used to select the active amp. Conversely, two ON switches let you override the AB function so that both outputs are always on. Each guitar amp output is transformer isolated to eliminate hum and buzz caused by ground loops and features a 180° polarity reverse to ensure the two amps play in phase.

Made from 14 gauge steel with a powder coated finish, the Radial JX62 is able to withstand the rigors of professional touring. As with all Radial products, the JX62 is made in Canada and covered by a 3-year transferable warranty.