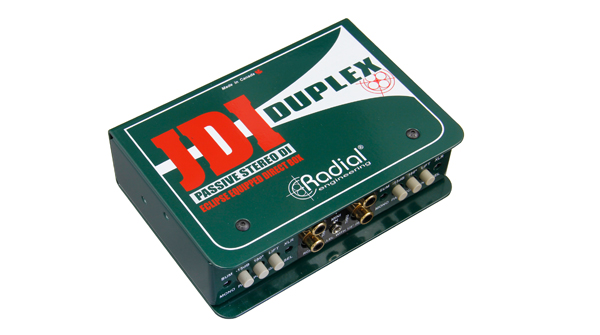 According to Radial Senior Engineer Dan Fraser: "The Duplex has gained international stature as the unchallenged champion of the stereo direct box world. So before making any changes to update such a legend, we wanted to make sure that we would retain the flexibility, ease of use, build quality and of course amazing sound.  At the end of the day we focussed on making it smaller for easy handling, incorporating a rack-mount option and adding a 3.5mm TRS connector for greater flexibility when being used with laptops and tablets."

The JDI Duplex is a passive direct box that is equally capable of handling low level instruments such as an electric guitar, or the most dynamic instruments, such as a digital piano. The 100% discrete design is centered around two high performance audio transformers that produce an exceptionally linear response from 10Hz to 40kHz and gently smooth out transients for a natural limiting effect that is often referred to as vintage sounding.  A full array of connectors including ¼", 3.5mm, RCAs and XLRs on the input side with XLR outputs make it a true Swiss Army Knife direct box.

As with all Radial professional direct boxes, the Duplex is made tough with a 14 gauge steel I-beam enclosure to reduce opportunity for stress on the PCB which could shorten the lifespan while providing a protective zone over the switches to prevent misuse or damage. A full bottom no-slip pad provides plenty of stay-put.  Front panel switches include -15dB pad, stereo-to mono mix, 180° polarity reverse, ground lift and XLR select.