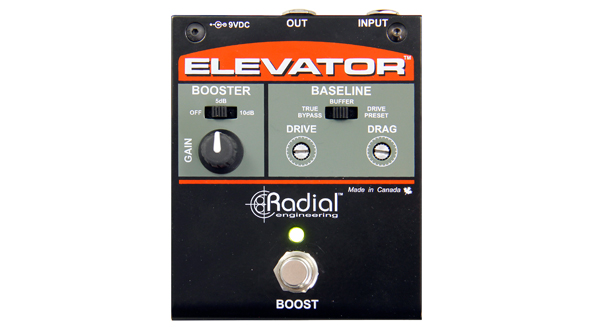 Radial Engineering Ltd. introduces the Elevator, a unique buffer and power booster designed to augment the performance of small 'class-A' amplifiers while providing larger amps with a more consistent tone.

Radial President Peter Janis explains: "Over the past several years, the Radial Switchbone has become a favorite ABY  switcher for a number of toneaholics including Derek Trucks. Interestingly enough, it is not just the switching that attracts players, but the unique power booster.  We replicated part of it with the BigShot PB1 and during a discussion with Hellicaster virtuoso Jerry Donahue, he asked if there was a way to retain the boost function but then add more. The result is the new Elevator."

The Elevator is made up of two sections: the baseline is used to set the foundation of the tone by choosing between true-bypass (circuit out) or the active buffered circuit. When in, Drag™ Control load correction lets you dial in the ideal load on the pickup for the most natural tone while eliminating the problems that are inherent with most buffers and true-bypass circuits by ether eliminating noise or bringing back the tone to the sound and feel as if plugged in. Two switches control the Drag and baseline signal drive. These are recessed to prevent accidental setting changes.  The right hand side features a fully variable boost level plus a mid-boost select to replicate the circuit used on the Switchbone. The booster is activated using the footswitch.

To ensure the utmost in signal integrity, the Elevator is made by hand in Canada and features 100% discrete class-A electronics. The buffer circuit is the same as used in the award winning Radial JD7 Injector which is used by Carlos Santana, John Petrucci, Steve Vai, Kerry King and Joe Perry.

"Driving the front end of a small guitar amp harder produces a unique tone that simply cannot be replicated. It adds a smooth texture reminiscent of Eric Johnson.  And when pushing a high gain amp harder you add more sustain without adding mud. It is like adding a natural overdrive to your signal path. Way too much fun!"

The Elevator will start shipping in March 2014.