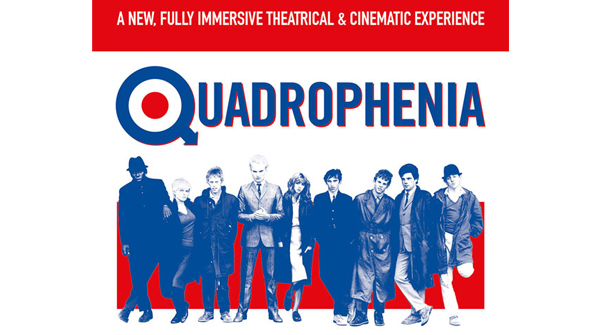 (PRESS RELEASE): British movie classic  is to become a fully immersive cinematic and theatrical experience, plunging fans into the sights and sounds of 1964 and capturing the spirit of the era.

Many of the film’s key stars will be taking part in the event, to be staged at London’s Eventim Apollo in Hammersmith on 11February 2016, including Phil Daniels who took the central role as disaffected Mod teenager Jimmy Cooper. Joining Daniels will be other major names from the cast including Toyah Wilcox, Trevor Laird, Garry Cooper and Daniel Peacock, who together will share their memories in a Q&A to add an extra dimension.

In addition to a screening of the 1979 film, based on The Who’s double-album rock-opera released six years earlier, and the Q&A session, there will be staged re-enactments throughout the night of scenes from the film to conjure up the feel of the mid-60s era in which it is set. The all-important sounds of the day will be performed live by leading Who tribute act Who’s Who, and there will be an exclusive VIP after party with appearances from all the Q&A special guests, plus memorabilia including original Vespas and their real life Mod owners. As any self-respecting Mod knows, it is important to look your best at all times and there will be awards with great prizes for the guests in the “best threads”.

Director Franc Roddam’s film is seen as a classic tale of alienation, disillusionment and escapism, as well as an important document capturing an important part of British youth history and rebellion. Watching the movie has been a rite of passage for millions since its release and the Mod era has been a source of fascination for generations – its fashions and music continuing to resonate.

In the film Daniels stars as bored teenager Jimmy Cooper who finds excitement and escape from his undemanding job by seeking thrills with his Mod pals, popping drugs, chasing girls, riding his Lambretta and fighting. After the thrill of a weekend in Brighton, which ends in a riot and a court appearance, he decides to leave his old life behind and head to the coast but finds the reality a harsh letdown.

Quadrophenia reflected the real-life situation of the day as partisan teenagers in fish-tails and leathers sought excitement through large scale scuffles when Mods and Rockers clashed at seaside resorts. Lines from the film’s famous courtroom scene were even lifted wholesale from genuine hearings. Q

Also featuring Sting as Jimmy’s idol Ace Face (who turns out to be considerably less cool than he has made out), Leslie Ash, Ray Winstone and Phil Davis, the two-hour film ranked in the top ten rock and roll movies of all time chosen by discerning readers of Rolling Stone magazine. The soundtrack featured many of The Who’s songs from the original album, including tracks such as ‘5.15’.

Immersive performances have become a hugely successful and popular way to enjoy much-loved films, adding an extra thrill and an unforgettable live experience.

Significantly for this event, the Eventim Apollo in Hammersmith actually featured in the original artwork for the 1973 QUADROPHENIA album release, with a photograph of The Who standing in front of the building, then known as the Hammersmith Odeon. It is also mentioned in the sleeve notes, in which Jimmy recalls seeing Who posters being pasted outside the building after he sleeps rough in Hammersmith.

Tickets go on sale from 9am on Friday 6 November available atwww.eventimapollo.com and www.axs.com. Standard ticket prices range from £30 to £43. VIP tickets £69.50.