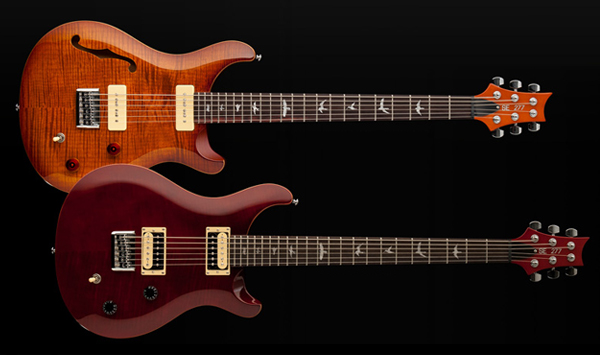 (PRESS RELEASE): PRS Guitars has announced the release of two new baritone guitars – the SE 277 Semi-Hollow Soapbar and the SE 277 – to its bevy of more affordable guitar model options. Tuned B to B two and a half steps below standard, the two new baritones offer a taut, muscular low end with powerful aggressive tones and offer the flexibility of going from chimey clean sounds, to warm depth, to articulate tonal hostility.

Named for its baritone 27.7” scale length neck, the SE 277 Semi Hollow Soapbar takes the traditional mahogany back/maple top platform to new territories with its chambered back, f-hole, and dual soapbar pickup configuration. The semi-hollow body provides increased acoustic resonance and clarity while the soapbars deliver a balance of transparent, uncompressed clean tones and thick growl. For guitarists who are comfortable with more traditional appointments, PRS has introduced the SE 277, which features the same 27.7” baritone scale length as its semi-hollow brother but with a solid body and PRS SE dual humbucking pickups. The SE 277 covers the spectrum of sound from sparkling highs, to surf-rock jangle, to heavy down-tuned aggression.

Baritone guitars are known to hold a unique position in the mix. When asked to describe the sweet spot where these baritones reside, PRS demonstrator Bryan Ewald said, “These two baritone guitars land somewhere in between the bass and guitar registers. Guitarists can play them to add a different sound to the mix and to fatten up rhythm tracks. Bass players can use them to create texture and tonal tenacity.”

“These guitars are a perfect fit for everything from country to surf rock to metal,” says Rich Hannon, PRS Artist Relations. “They are comfortable to play with a shred-worthy feel and handle alternate tunings like a beast.”Additional specifications for both the SE 277 Semi Hollow Soapbar and SE277 include a beveled maple top with flame maple veneer, mahogany back, 22-fret maple neck with rosewood fingerboard with bird inlays, PRS-designed plate-style bridge, PRS-designed tuners, volume and tone with a 3-way toggle pickup switch.

For more information on PRS SE Line of Baritone Models