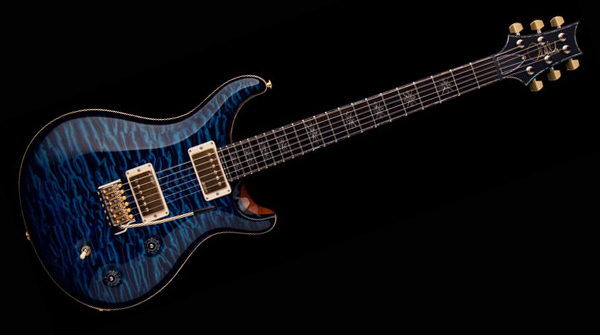 (PRESS RELEASE): Introduced in the fall of 2011, the PRS Collection Series is made up of a very limited number of instruments each year that are made with the most prized components in the company’s possession, using PRS’s most exacting methods. Paul Reed Smith, along with the Private Stock team, designs and oversees all aspects of production, including the selection of all tonewoods and components. The new Collection Series IX is comprised of fifteen pairs of McCarty Trem models, with each pair consisting of one highly figured curly and one highly figured quilted maple top guitar. These instruments proudly incorporate a balance of PRS traditions and innovations. The McCarty model dates back to 1994 and celebrates Paul’s mentor, Ted McCarty, who served as the President of Gibson during their Golden Era. This model was proudly re-introduced for PRS Guitars’ 30th Anniversary (1985-2015).

“This new Collection Series takes the art of guitar building to a whole new level,” states Judy Schaefer, PRS Marketing Manager. “Impeccable craftsmanship, the best components, and the most sought after tonewoods make the Collection Series IX guitars a “must-have” for the most serious of guitar enthusiasts.”