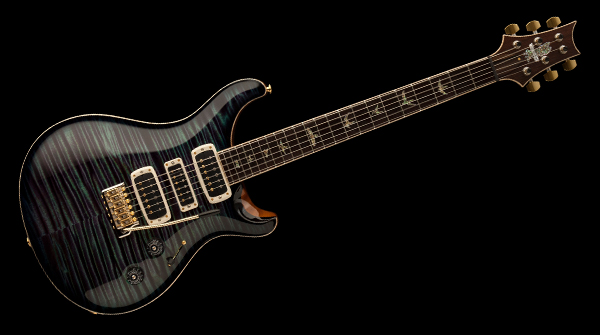 (PRESS RELEASE): PRS Guitars has announced the release of a very special, very limited run of instruments to mark the 20th anniversary of the company’s Private Stock programme.

Paul Reed Smith played a huge role in the design of the 20th Anniversary Private Stock guitars (of which just 40 will be built), which harks back to Howard Leese’s ‘Golden Eagle’ model.

Like the Golden Eagle, these guitars have slightly modified body dimensions, with a 1/16” thinner top and 1/8” thicker back than the normal PRS “Custom” body design, for a warmer tone. Paul also specified a very precise 24.6” scale length neck and hand-selected all of the East Coast curly maple tops from what he felt were two of the best batches of maple in PRS’s history. The electronics are also unique, with a three pickup configuration consisting of two narrow 408 treble and bass pickups and a Narrowfield middle pickup. The 5-way blade switch and control placements also nod to the Golden Eagle’s original electronics layout.

“When I played the prototypes for this model, they reminded me very much of what I would be making if I was still in a two-person shop,” stated Paul Reed Smith, PRS Guitars’ founder and Managing General Partner.

PRS Guitars completed the first Private Stock on April 19, 1996. The twenty-year-old programme had started as a way to recapture the original essence of the PRS workshop with a small team making fewer guitars with more customisation. With this mentality, Private Stock has allowed customers the opportunity to design the guitar of their dreams, and along the way Private Stock has also developed exclusive models and one-off instruments of their own design. In addition to customisation opportunities, Private Stock instruments are built with the finest woods, materials, and attention to detail.