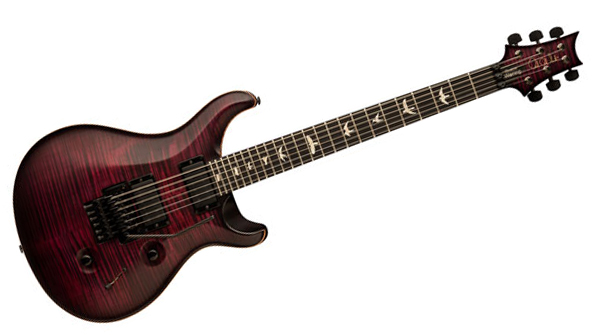 PRS has announced its latest signature release; The PRS Dustie Waring Limited Edition. This limited model features a ‘Floyd’ Custom 24 platform along with some unique features that the Between the Buried and Me rhythm player had made for his chosen PRS, such as his signature DiMarzio humbucking pickups.

(PRESS RELEASE): The progressive metal band, Between the Buried and Me has a sound that is heavy yet melodic, lush but menacing - a tone that rhythm guitarist Dustie Waring achieves with PRS guitars and amplifiers. Since 2008, Waring has traditionally used a PRS Custom 24 outfitted with Floyd Rose tremolo system both on tour and in the studio. Recently, Waring and PRS Guitars got together to create a limited edition signature model that would look and sound even more vicious than Dustie’s current PRS guitar.

The new PRS Dustie Waring Limited Edition takes the ‘Floyd’ Custom 24 platform adds some unique features that Dustie specified to make his perfect PRS, including Dustie Waring signature DiMarzio humbucking pickups. Waring’s signature pickups were designed to cover the spectrum from pristine cleans to heavy rhythm chords all with no harsh trebles or mushy bottom end. Paired with black hardware and a satin finish, these guitars have a look that is as sophisticated and menacing as Waring’s tone.

“I can’t see myself playing anything else. They are perfect instruments that you can get any tone you want out of, and they look absolutely baddass,” Dustie Waring, Between the Buried and Me.

The announcement of Dustie’s new model comes on the heels of Between the Buried and Me’s release of their new DVD Future Sequence: Live at the Fidelitorium. This project is in contrast with the band's ambitious and impressive live stage productions and features the band in a small studio that provides an intimate setting for their performance of The Future Sequence album in its entirety. BTBAM recorded at the Fidelitorium outside Winston-Salem, NC after the conclusion of their last North American tour. Director Justin Reich (Black Label Society, Hatebreed, Periphery) was behind the cameras for this project, and longtime BTBAM producer, Jamie King, mixed and mastered the audio. The DVD is available at metalblade.com and through the band's website.

Other features of the new Dustie Waring Signature limited edition model include carved figured maple top, mahogany back, 25” scale length, 24 fret rock maple neck, an “Original” Floyd Rose tremolo, PRS Phase III locking tuners, glow-in-the-dark sidedots, and PRS Bird inlays. Full specifications and a video with Dustie can be found at http://www.prsguitars.com/dustiewaring, and you can Meet the Artist at www.prsguitars.com/artists by checking out a short Q&A with Dustie Waring on his signature model, advice for aspiring musicians, and more.

While there is no cap to the number of Dustie Waring signature guitars that will be made, the order window is limited to October 8 through December 15, 2014. Contact your Authorized PRS Dealer to place your order.