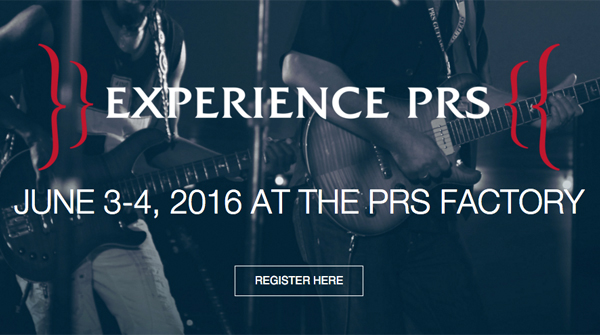 (PRESS RELEASE): PRS Guitars has announced the 8th Experience PRS event will be held at the PRS Guitars factory on June 3rd and 4th, 2016. The event, billed as the Ultimate Guitar Festival for Guitarists and Music Lovers, will bring together a unique combination of authorized PRS dealers and distributors, worldwide press, celebrated PRS artists, and PRS customers and enthusiasts for two days of fun, education, concerts, and appreciation. From its humble beginnings in 2007 with an attendance of around 800 people, the event is expected to attract close to 3,000 attendees this year from all over the globe.

This June, PRS will once again open its doors and create an exciting and interactive schedule, including factory tours, artist clinics, product demonstrations, hands-on opportunities (including staining your own piece of curly maple to take home), a jam stage for guests to sit in with the house band and show their skills, and star-studded evening concerts. With an incredible selection of PRS instruments and amplifiers on display, Experience has also become a destination event for players to pick their next PRS guitar or amplifier. Recognizing this, PRS is building several unique guitars and amplifiers for the 2016 event - details of which will be announced at a later date.

In addition to these opportunities, PRS is also booking two day stages for Saturday with alternating performances by a wide variety of PRS artists. By adding this more aggressive concert element, Experience PRS will expand beyond an open house for fans of the brand to have a 'backstage pass'